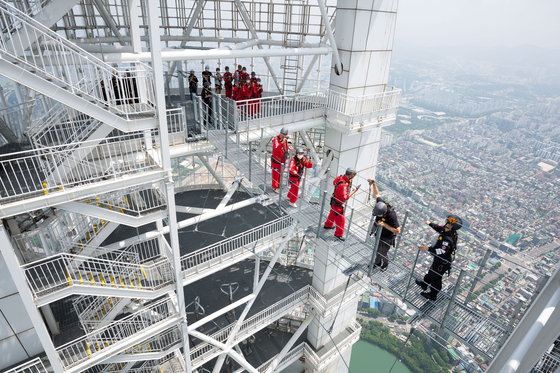 People taking a walk on the Sky Bridge at Lotte World Tower, which is set to open to the public on Friday. [LOTTE WORLD]


I never step back from a chance to try something new, especially activities that are likely to get my adrenaline pumping.

For someone who dreams about going skydiving one day, the chance to take a walk around Lotte World Tower's newly opened Sky Bridge and see a miniature-sized Seoul from about 541 meters up (1,775 feet), was one that I could not pass up.

Lotte World Tower is the tallest building in Korea and the fifth tallest in the world.

When I arrived at the elevator that would transport me to the bridge, I was greeted with a promotional video showing two steel peaks connected by an 11-meter-long bridge. The video filled with quick cuts of sky-high views got my heart palpitating. Would I be able to do this? 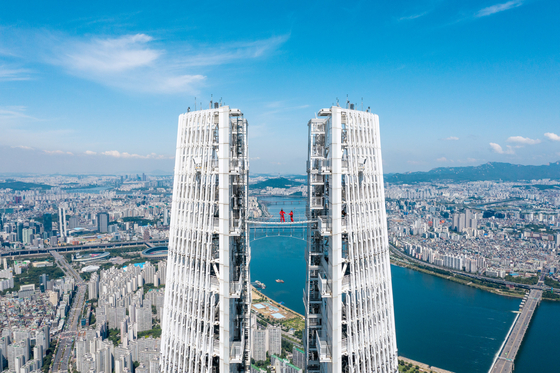 
The answer was yes and the trick was simple. Just don't look down.

Maybe I can say this so confidently because I’m not on the bridge anymore and have regained my composure. Or maybe because everything seemed so surreal, as if I was wearing VR goggles, that it was easier for me to keep calm. You won’t know whether you agree with me until you try getting up there yourself.

I was able to take a step out to the bridge without much hesitation. I just kept looking afar to the Han River and the endless forest of apartment complexes instead of looking straight down to the view of Seokchon Lake. I barely remember seeing it, so I might have not even tried. Every action I took was in some kind of a slow motion. Someone called out my name and told me to stand straight. Then I realized that my knees were bent. I straightened them up to show that I wasn't too scared to stand up on the bridge.

After taking in the views, the staff began interacting with us. Part of a four-person group, I was asked to walk forward and backward, and even do it with my eyes closed. Surprisingly, everything was doable.

Then we were asked to spread out a bit to create space between one another so we could do jumping jacks. What? I watched the all four group members complete the task before I did it myself. They made it look like it was a piece of cake, so I was somewhat confident that I could do it. But when it came to my turn only one of my arms made any kind of movement around my head while my other hand remained firmly gripped onto the railing.

I later saw the video of me trying to jump and couldn’t help but burst into laughter when I saw how stupid I looked. My attempt to try a jumping jack appeared so earnest when in fact my feet were barely even lifted off from the ground. 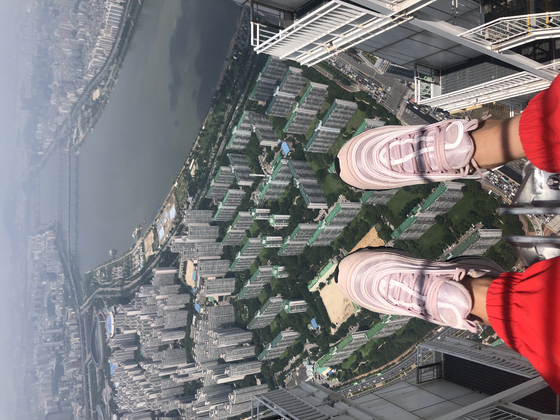 A shot while seated on the Sky Bridge. [LEE SUN-MIN]


We were then told to try sitting down if we felt up to it. This was actually something I wanted to do, because I assumed sitting down would be more comfortable, but I was too scared to stretch my legs out.

However, after being seated for a few seconds with the rest of my group who were all able to do so with ease, I felt confident enough to give it a try! I took the opportunity to take the perfect picture for my Instagram in my favorite sneakers floating in the air with a beautiful view of Seoul below.

I was actually sad to leave the bridge and felt myself longing for more. I didn’t even take a selfie or have anyone take my picture at the bridge. Looking back, I didn’t take nearly enough videos of everything I saw. I wish I fought away my fears sooner so that I had more time to enjoy the view from the bridge.

In retrospect, I think the most difficult part was walking up the stairs to get to the bridge. You walk from the 121st floor to 124th in a staircase where all the walls are black before you finally emerge and are greeted by the sky. You are then hooked up to a safety line that is attached to the railings of the staircases you need to walk up. The nerves really began here.

The bridge is now positioned high above your head which does nothing but add to your nerves as you anticipate the climb ahead of you. 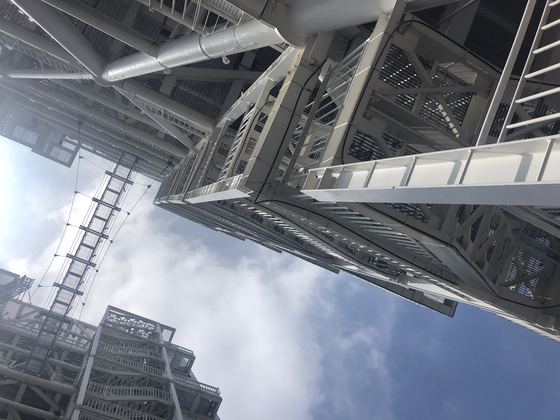 The bridge from below. [LEE SUN-MIN]


From the stairway you can see the view of the Han river from one side, and the view of endless rows of apartment complexes from the other. The clouds seem to be within reach if you were to just stretch your arms out.

I stayed right behind the person in front of me, so I wouldn't have to see what was in store for me.

Waiting for my turn to walk on the bridge wasn't too nerve-wracking as I was occupied with taking pictures of my surroundings.

Everything looked so tiny, and reminded me of the Lego villages I used to build.

Don't worry about dropping your phone. Before you begin your adventure, the staff offer you a chance to change into a jumpsuit they provide and give you a phone holder with a touch-friendly front cover that you can wear around your neck. To make sure you don't drop the holder, the staff attaches it to your suit with a wire.

I chose to wear the jumpsuit because I was worried my loose-fitting pants might catch onto something and I just didn't want to take any unnecessary risks!

Since you wear your clothes underneath the jumpsuit, I'd advise wearing something that doesn't soak in perspiration easily, as the double layer of clothing plus the nerves will induce a lot of sweating. 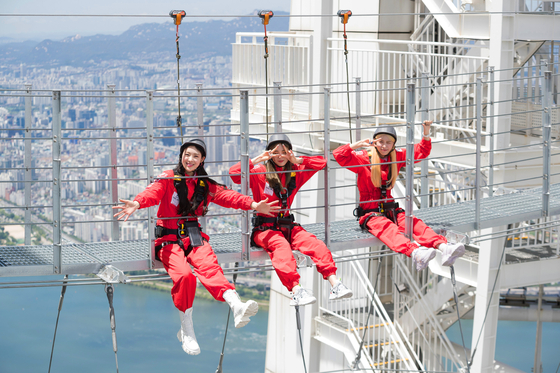 
While the experience is not as thrilling as bungee jumping or skydiving, the new bridge can definitely be classified as an extreme observatory.


The Sky Bridge opens to the public for the first time Friday. Opening hours are from 1 p.m. to 7 p.m., Wednesday through Sunday. The last group leaves at 6 p.m. There are some physical restrictions to getting on the bridge. Anyone under the age of 12, whose height is below 140 centimeters, whose weight exceeds 120 kilograms (265 lbs) or with other health issues (check with the organizer for further details), won’t be able to take part. It costs 100,000 won ($83) and that includes visiting the observatories on the 118th and 120th, getting on the bridge and photographs to take back home. For more information, go to www.lwt.co.kr or call 1661-2000.