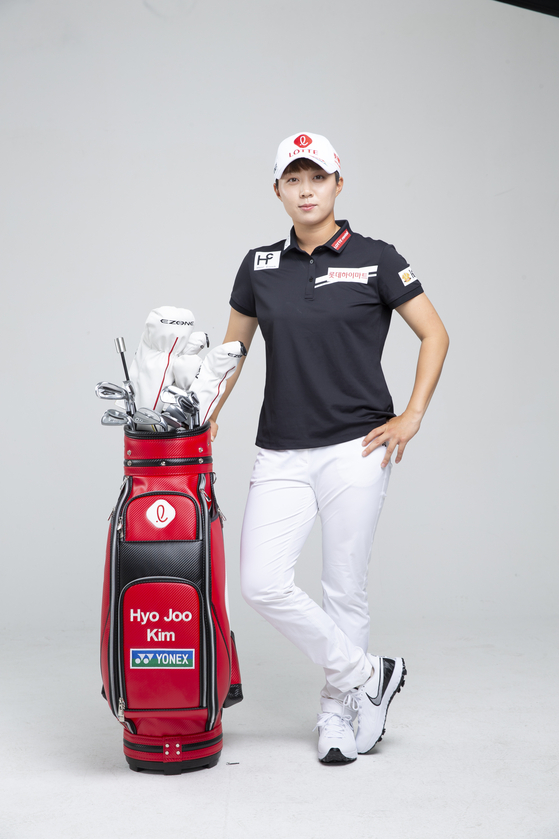 
Kim Hyo-joo has been hiding behind her sunglasses for years.

The world No. 10 has been a big name in golf for nearly a decade, making a splash on the amateur circuit back in 2012 before turning pro. That season, Kim won the Lotte Mart Women's Open on the KLPGA Tour, the Suntory Ladies Open on the LPGA of Japan Tour and the Swinging Skirts Taiwanese Open on the LPGA of Taiwan Tour, and only then did she decide it might be worth turning professional.

Later that year, as her rookie season on the KLPGA Tour began, Kim won the Hyundai China Ladies Open in December. Although that was her only win in the 2012-13 season, her consistency saw her ranked toward the top in many of the year-end awards categories.

At the 2014 Evian Championship on the LPGA Tour, Kim set the record for the lowest-ever 18-hole score at a major, shooting 61 in the first round. She went on to win the tournament and a year later joined the LPGA Tour.

She did it all looking out through those signature sunglasses.

"I wear them to not show the other players where I'm looking," says Kim. "Also, the view is better."

The love of the game

Kim was four or five years old when she first saw a golf club.

Like the majority of golfers in Korea, the first time she saw a golf club was also the day she first swung one. Unlike a lot of pros, however, Kim had no grand aspirations about making it in the world of golf. She doesn't really remember, but according to her parents, she stuck with golf because she enjoyed it so much.

Born in Wonju in Gangwon, Kim played golf as a hobby. As she grew older and discovered her competitive edge, someone suggested she should compete in a tournament.

“I think it was around when I was in second grade,” Kim says. “Since I lived in Gangwon, it was a small event. As I kept on competing and winning, I got to compete at bigger tournaments and to the nationals. That’s how I started. I didn’t start [golf] to become a pro.”

Kim's career has had its ups and downs. Since that initial success up until 2015, things have grown quieter. Kim has picked up just a handful of tournaments in the last few years, but it doesn't really matter because she enjoys the sport.

But what makes it so enjoyable? Kim has no idea.

Kim is known for her stoic presence on the course and unflappable personality. With friends, Kim says, she's loud and boisterous, but that couldn't be further from her public persona.

“Once I go onto the golf course, I feel like I start having less thoughts,” Kim says. “Everything gets simpler, like I have no thoughts in my head.”

On television, Kim comes across as incredibly focused and serious, a look that's intensified by her ever-present sunglasses. When she plays with friends, Kim is actually very chatty and has often had other golfers complain that she's talking so much it puts them off their game — but in tournaments, she just wants to play golf without overthinking it, pushing herself on to the next hole.

In fact, Kim says that if she had a motto it would be: "Just don't think and enjoy the round."


Most golfers have their own way of counting holes or scores to keep themselves motivated throughout the game. Kim's so busy trying not to think that she doesn't bother with any of that.

“If I’m tired I might [count], but most of the time I don’t,” Kim says. “When I’m tired, I sometimes ask my caddie how many holes I have left. And I just tell myself that I want this round to be over, but when it’s fun, I feel like I can continue playing.”

The same applies to scoring, but in a different way.

Kim may be keeping her mind clear, but that doesn't mean she doesn't notice what's going on around her, especially recently when games were played without the gallery.

Despite having picked up 13 victories as a professional golfer, Kim still gets nervous on the first hole. But things have changed a little this season.

Kim isn't superstitious, but she does have her own routine. Keeping her head clear all the time isn't easy, and Kim knows exactly which distraction works for her.


“I have to listen to music before I start my round,” Kim says. “I listen to it until like right before my tee time. I wish I could play [with earphones on], but since I can’t, I listen to it right until my tee time. If my tee-off time is at 9:20, I'm listening to music until at least 9:17, to keep my tension right where it's at."

Kim's sunglasses are such a signature part of her look that she's hardly recognizable without them.

"I’ve been wearing them since I was little," Kim said. "I feel awkward without them.”


Kim started wearing her sunglasses in middle school, initially because of the sun. As she's grown older, Kim has also realized that she benefits from other players not knowing where she's looking.

Kim is so well-known for her sunglasses that when she goes out in public without them, people don't recognize her.

Along with her sunglasses, when she first competed on the KLPGA Tour this season, she was one of the only players to wear a mask for her entire round, not removing it while taking her shots like other players.

“It wasn’t that hot at that time,” Kim says. “Also, the mask covered my face as well. So people couldn’t see whether I was smiling or cursing.”


Kim's constant efforts to cover up extend to her outfit — she has always played in long sleeves, whatever the weather. But unlike the sunglasses and mask, her long-sleeve tops are less about secrecy and more about allergies.

“I have allergies, I don’t really have a choice,” Kim says. “I feel hot too.”

Kim might be pretty laid back, but that doesn't mean her career has all been plain sailing.

Kim didn’t pick up a single win in those three years, a far cry from her triumphant debut a few years earlier. It was actually midway through the 2016 season, after she picked up her third LPGA Tour win at the Pure Silk-Bahamas LPGA Classic in January that year, that the dry spell began. Apart from a single KLPGA Tour event in December 2016, the Hyundai China Ladies Open, Kim didn't win anything until things picked up this year.

“It was a really difficult time for me,” Kim says. “No matter how [laid back] I am, I still feel it when something’s tough. When I hit the ball, it felt like it was going to go in a different direction. As I saw and felt that I wasn’t doing well, I slowly lost confidence and started to get nervous.”


Although it was a slump, Kim’s performance during that time wasn’t bad. Throughout the three and a half years, Kim missed the cut just a few times and slowly made her way up as she had three runner-up finishes on the LPGA Tour last year.

For Kim, that period might have felt worse coming on the back of years of success. Her mantra throughout that time came from those glory days.

“I kept on telling myself that I can do it because I used to play well,” Kim says.

“After the [2018 season] ended, when I was training,” Kim says, “I started to have this thought that I’m going to play well in the upcoming season. But since I still had the memories of not playing well, and we play the same courses, it reminded me of those memories. As I take one shot at a time, and started seeing my shots going to spots where I want them to, those bad memories started to fade away, slowly.”

Just as she said, looking back at her LPGA Tour, she was slowly making a comeback as she had three runner-up finishes.

Kim slowly picked up the pace and finally made her return to the top by winning the 10th Lotte Cantata Ladies Open at Skyhill Jeju Country Club in Jeju Island this year. This was a meaningful victory for Kim as it was the same tournament that she first won as an amateur. Also, as she defeated her close friend Kim Sei-young in the sudden-death playoff, Kim says it was a bittersweet victory. 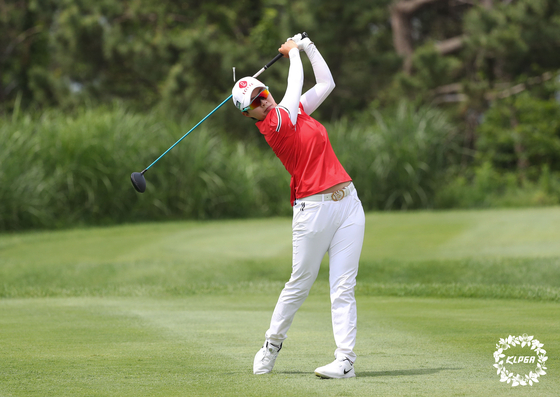 Kim Hyo-joo watches her shot during the final round of the 10th Lotte Cantata Ladies Open at Skyhill Jeju Country Club in Jeju Island on June 7. [KLPGA]


“To be honest, when I went to the play-off with Sei-young, I didn’t think that I would win and I didn’t want to play against her because we are so close,” Kim says. “I was hitting well and had confidence but since I kept on finishing as runner-up, I felt like if I finished as runner-up again, I would do that for the rest of my career. It felt good to win, but since I’d defeated someone close to me, I had mixed emotions.”

In fact, Kim chose that recent victory as the one unforgettable tournament of her career, because "it was a long-awaited victory."

As Kim has grown older, her goals have grown shorter. When she was little, she says that her goal was to get into the Hall of Fame, but as she grew older and heard how hard that could be, she quickly put that goal aside and focuses on the here and now.

“[For example,] since I wasn’t winning for a while, I had the goal of picking up a win at the start of every season for a while,” Kim says. “And I had that same goal this year. Now that I’ve won, I haven’t come up with a new goal yet.”

Although she hasn’t set a goal yet, there is one that she has in mind.

“On my signature, I always put the number of wins [I’ve picked up],” Kim says. “It took a long time for that number to change. I promised my mom that I’d try to change that number again within a short period of time. So I would say that’s my short-term goal.”

Back when Kim was just an amateur golfer competing in tournaments, she dreamed of leaving the golf scene when she was at her peak. But just like her goals, this has also changed as she got older.

“I think now, when I’m at my best, I want to enjoy that moment for a little bit,” Kim says. “And when I, not what other people say, think that it’s about time to retire, then I think that’ll be the right time.

“Originally, I was thinking when I was around my current age I'd like to retire. But now that I've got here, I'm not ready. My thoughts have changed — I'll play for as long as I can."