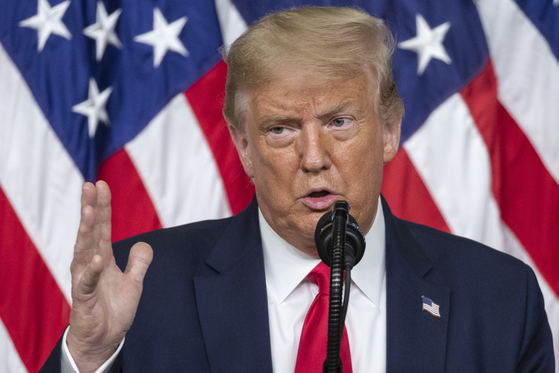 
U.S. President Donald Trump stressed that Washington’s “ironclad alliance” with Seoul is vital to peace and stability in Asia and around the world in a proclamation marking the armistice agreement that ended the 1950-53 Korean War.

“Today, the Republic of Korea, once decimated in the aftermath of the war, is one of the world’s most vibrant, dynamic, and economically prosperous democracies — and one of our strongest allies,” said Trump in a proclamation released by the White House on the eve of the National Korean War Veterans Armistice Day, which falls on a Monday.

“This ironclad alliance, forged in war and reinforced by a shared love of liberty and deep ties of friendship, is vital to peace and stability in both Asia and the world.”

Trump noted that U.S. forces “continue to proudly serve side-by-side with our Korean military counterparts” to this day. He continued, “As we commemorate the 67th anniversary of the Korean War Armistice, we renew our commitment to the principles of liberty for which our Korean War veterans so valiantly fought.”

His remarks come as the two allies continue to struggle to seal a new Special Measures Agreement (SMA) after their previous bilateral defense cost-sharing deal expired at the end of last year.

Reports earlier this month indicated that the Trump administration was considering reducing the U.S. military presence in Korea to below the current 28,500 personnel. U.S. Secretary of Defense Mark Esper subsequently said he had issued no orders to withdraw forces from the Korean Peninsula.

U.S. Deputy Secretary of State Stephen Biegun said in a Senate hearing last week that Seoul and Washington have agreed there is a need to “rejuvenate” the alliance but added that a “substantial presence” of U.S. troops in the region “would strongly advance America's security interests in East Asia.”

Trump didn’t have a message toward North Korea as he did in his previous two armistice proclamations.

Trump’s proclamation in 2019 mentioned his third meeting with North Korean leader Kim Jong-un at the demilitarized zone at the inter-Korean border the previous month on June 30.

Noting he was the first sitting U.S. president to step into the North, he said at the time, “I hope these steps will spur progress in the ongoing effort to achieve the complete and verifiable denuclearization of North Korea, establish a permanent peace on the Korean Peninsula and continue the recovery and repatriation of remains of fallen American soldiers.”