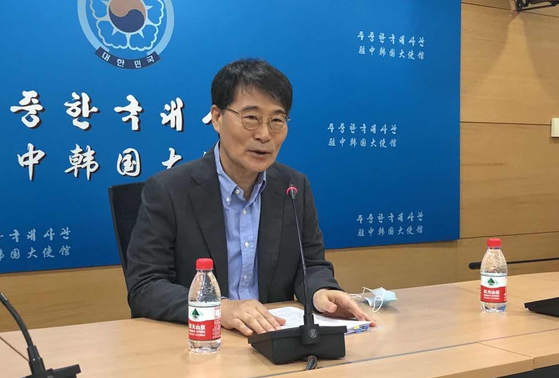 South Korean Ambassador to China Jang Ha-sung speaks to reporters in Beijing Monday on the resumption of Chinese visas for Korean students and workers. [YONHAP]

South Korean Ambassador to China Jang Ha-sung, speaking to reporters in Beijing, said that the Chinese government has agreed to issue visas for three groups of Koreans: students, long-term employees and those with valid residence certificates.

The exact date of resumption of visa issuances has not been announced, but it is expected to be in early August.

In response to the Covid-19 pandemic, China banned the entry of foreigners starting March 28, including people holding valid visas and residence permits.

This prevented Koreans working or studying in China from return for some four months.

China's Z visa is issued to foreigners who will work in the country for more than six months.

Koreans whose residence certificates have expired are not included, and Jang said this is an area for “future discussion.”

“The new semester in China begins in September, and a path for students to re-enter the country is opening,” Jang told reporters. “This will also alleviate at least a little bit of the difficulties incurred by Koreans earning their livelihoods in China.”

South Korea would be the first country that China is resuming some visa issuances to and can serve as an example as Beijing opens up to more countries.

Jang, an economist and former Blue House chief of policy, has served as ambassador to China since March 2019.

He said that the two sides have been “actively” discussing how to open borders in recent days.

Jang added that the “lack of Covid-19 cases entering from Korea and the success of the quarantine measures played an important role” in the agreement with China.

At the beginning of May, Seoul and Beijing introduced a fast-track entry mechanism for businesspeople traveling between the two countries to minimize strict Covid-19 quarantine procedures upon arrival. The fast-track entry system applied to Koreans visiting 10 regions in China for business purposes but excluded Beijing.

Korea since April imposed a 14-day quarantine for all inbound passengers.

But the two sides have been discussing ways to expand the fast-track procedure to include more essential travelers.

Some 50,000 Korean students studying in China have mostly come home to Korea during the coronavirus pandemic. Around one-third of Korean residents in China have not been able to return to the country.

A resumption of visa services is expected to lead to increased flights between the two countries.

The South Korean embassy and consulates in China are expected to hold further discussions on the matter Tuesday.

Last Thursday, Byun Chul-hwan, director-general for overseas Koreans and consular affairs, and his Chinese counterpart Cui Aimin held a video conference to “discuss ways to gradually increase people-to-people exchanges,” said Seoul’s Foreign Ministry in a statement. The two sides recognized their their efforts and “achievements in disease prevention and control,” it added.

Japanese Prime Minister Shinzo Abe said last week Japan will commence negotiations to resume business travel with some 10 countries and regions, including China and South Korea, as it moves toward easing some entry bans.