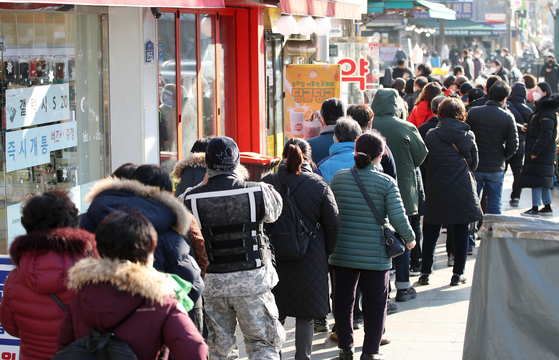 People lining up to buy masks at a pharmacy in Jongno District, central Seoul, on March 5, 2020. [YONHAP]


China was the top recipient of masks and other Covid-19 protective gear donated from Korea to developing nations last year, during a time when people in Korea were limited to buying two masks a week, a lawmaker’s office reported.

According to the office of People Power Party Rep. Thae Yong-ho, the Ministry of Foreign Affairs provided some 120 developing nations last year with $51.61 million worth of masks, test kits and personal protection equipment (PPEs), of which the largest majority — $4 million worth — went to China.

The ministry’s report to Rep. Thae’s office was obtained by the Chosun Ilbo.

“This was done when people in Korea were struggling due to shortage of masks, when people were limited to buying two masks a week,” said Rep. Thae, according to the paper on Wednesday. “It is unacceptable that in such a moment the country was providing so much to a G2 nation. Did the Foreign Ministry intend to entice Chinese President Xi Jinping to visit Korea by spending so much of the citizens’ tax payments?”

President Xi's visit to Korea had been floated in the media throughout last year.

Korea faced a mass shortage of masks in March 2020, and the government had to limit to the number of masks individuals could buy to two per week. Long queues outside of pharmacies during lunch hours were a common sight during that time.

There were also reports at the time that the Foreign Ministry was asking local governments to collect masks to send to China. The ministry on March 3, 2020, refuted these reports, stating that “the ministry is not taking part in the local governments’ activities to support China with masks and other materials.”

Local governments, including Seoul, Busan and Daegu city governments and North Gyeongsang and Gangwon provincial governments, were reported at the time to have plans to donate masks to their sister cities and provinces in China.

"The scale of donations to China were determined based on the situation that China was facing in January 2020, when it was being hit the hardest by the pandemic compared to other nations," a Foreign Ministry official told the Korea JoongAng Daily. "The scale of donations for all the recipients were calculated based on their individual needs and situations at the time."