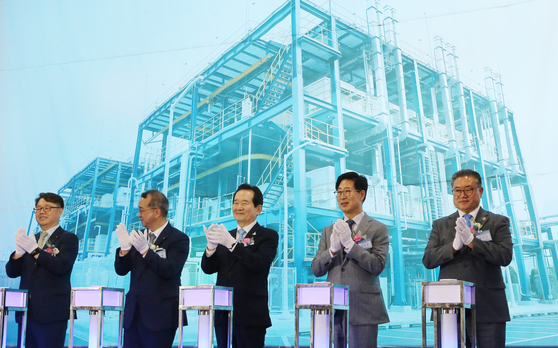 The plant, located at Daesan Industrial Complex in Seosan, South Chungcheong, is rated at 50 megawatts and will produce enough electricity to supply 160,000 households.

Since it utilizes the byproduct hydrogen, the Daesan plant does not produce green gasses.

According to the Ministry of Trade, Industry and Energy, the hydrogen fuel cell power plants produce less noise pollution than traditional power plants and are also more efficient.

Compared to other renewable power plants, such as those using solar panels or wind turbines, the hydrogen fuel cell power plant takes up less space.

The company so far has supplied a total of 987 hydrogen fuel cells totaling 433 megawatts.

“Our goal is to use 100 percent of our own technology up from 98 percent,” said Yoo Soo-kyung, Doosan Fuel Cell CEO. “The Daesan hydrogen fuel cell power plant will play an important role in securing the technological advantage in the world’s fuel cell market.”

The government sees the development of hydrogen fuel cell technology as an advantage for the country.

“Korea has outstanding technology and provides 40 percent of the world’s hydrogen fuel cells,” said Prime Minister Chung Sye-kyun, who attended the ceremony. “We have a goal of turning it to a major export industry.”