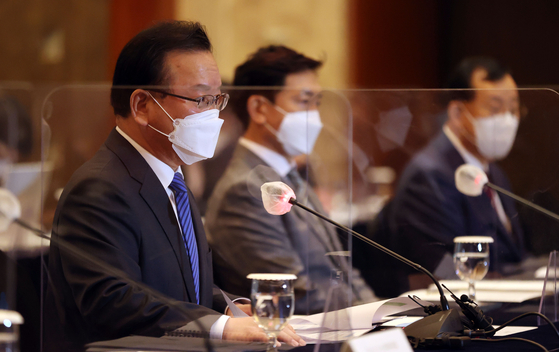 The government has set a goal of being able to produce 27.9 million tons of "blue" and "green" hydrogen gas by 2050.

The cleaner forms of hydrogen -- which means no carbon has been emitted in the production process -- will account for 60 percent of the hydrogen available for use Korea. The balance will be "grey" hydrogen, which is made in ways that produce carbon dioxide.

The government released its first hydrogen economy blueprint on Friday.

The hydrogen will be produced through either natural gas ("blue" hydrogen) or through renewable energy sources ("green").

Some 82 percent or 22,9 million tons will be supplied from overseas, largely from companies with Korean investment or using Korean technologies.

The remaining 3 million tons will be supplied through green hydrogen production and 2 million from blue hydrogen.

Technology development in green hydrogen is expected to bring down the unit price from 3.500 won per kilogram to 2,500 won.

The government plans to produce blue hydrogen through development of carbon capture and storage (CCS) technology.

Once the plant in Boryeong, South Chungcheong, is completed in 2025, it will be the world’s largest blue hydrogen production plant, producing 250,000 tons of the gas annually.

Under the blueprint, the government estimates an economic effect of 1,319 trillion won as well as a reduction of greenhouse gases by at least 200 million tons.

The government also laid out plans for infrastructure including hydrogen charging stations.

By 2025, the government plans at least one charging station in all 226 counties, districts and cities across the country.

No driver in a major city will have to drive more than 20 minutes to find a hydrogen charging station by 2030 and that will be reduced to 15 minutes by 2040.

For more efficient supply, the government has a goal of setting up 14 ports that can handle the hydrogen trade.

By 2040, hydrogen from marine resources will be10 percent of the green hydrogen in the country.

“Hydrogen will be the most powerful tool in achieving carbon neutrality by 2050,” Prime Minister Kim Boo-kyum said Friday. “It will be the biggest single energy source, accounting for one third of all energy consumed.”