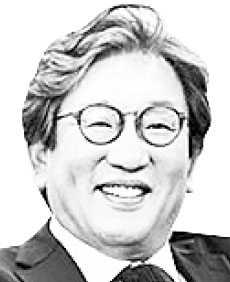 Kim Sang-hyup
The author is a professor at the Graduate School of Green Growth, College of Business, KAIST and chairman of Coalition for Our Common Future.

President Moon Jae-in vowed to include “green” industries in the Korean-style New Deal project to rebuild the country after the pandemic. His government must specify the goal, areas for investment and why it is needed. I would like to share some of my thoughts on the issue of green-themed sustainable growth.

First of all, the cause and goal of the project should be clear. The New Deal is an extraordinarily large-scale fiscal spending plan in the face of an economic crisis. Large tax spending alone does not define the New Deal. Deals must be agreed to and arranged among concerned parties.

The Green New Deal is aimed at accelerating economic and social migration towards low carbon emission and environmentally-friendly systems to combat climate challenges threatening the livelihood of humankind. The ambitious goal has gained an impetus from the Covid-19 pandemic. New viruses and infectious diseases are making themselves known. In a message for the April 22 International Mother Earth Day, United Nations Secretary General Antonio Guterres said that Covid-19 has been a “wake-up call” for the green drive.

The goal can be achieved only when there is a radical reduction of greenhouse gas emissions from fossil fuels like coal, petroleum and gas. The idea is to pump in government spending to usher industries and jobs towards a recovery led by green growth. The European Union has laid out a 1 trillion euro ($1.09 trillion) plan — nearly a quarter of its budget — to invest in a Green Deal at the beginning of this year. The plan to tackle climate challenges will only succeed when countries with thise on other continents.

The UN Secretary General sent a letter to President Moon asking Seoul to lead the way in the green initiative as it had set an example in fighting Covid-19. When a financial crisis swept the world in late 2008, Seoul outlined a 50-trillion-won Green Deal project to fund a recovery in the face of external crisis. Ban Ki-moon, former UN secretary general, also remarked how the international society had been impressed by a green drive by Korea to overcome an economic crisis at the time. 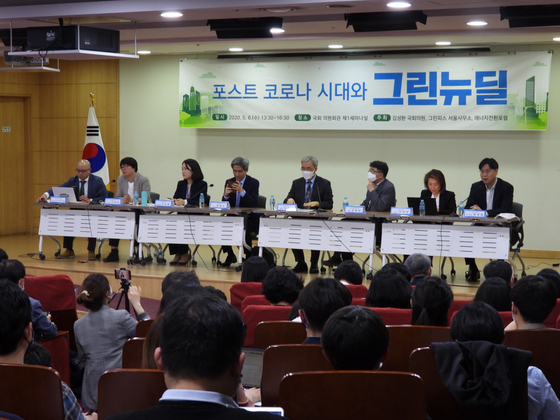 Panelists debate how to achieve a Green New Deal in the post-coronavirus era at the National Assembly on May 6. [KANG CHAN-SU]

To upgrade the Korean Green Deal, Seoul must appoint a new architect and establish a coordinating body for the project. The Green New Deal is not a simple environment protection campaign. The work of converting the entire economic system to low carbon emission requires a human pool of broad expertise and farsightedness. The role of mediating among government offices is also essential. Given its comprehensive nature, the project would require all government offices beyond environment and energy divisions. The Blue House must launch an experts group and play a mediating role.

Second, the project must be able to contribute to sustainable clean infrastructure and jobs. The Green Deal program should involve not just energy, water, traffic and telecommunications but also quarantine, fine dust and waste disposal processing. It must set the grounds for the clean economy. The works should not be discredited simply as wasteful pork-barrel projects or favoritism towards a certain field. Overseas experts like Bill Gates need to be recruited to study whether the government’s plan to phase out of nuclear fuel is reasonable.

Third, the project should have eyes on long-term goals — and beyond the next government term. The Green New Deal should be outlined in 30-to-50 year plan that can stay intact regardless of who takes power. When former President Lee Myung-bak drew up the Green Deal bill in 2009, Jeremy Rifkin, the author of “The Green New Deal,” underscored the importance of maintaining governance that can last over 20 years. But the program was trashed as soon as a new president took office. The new deal should be pursued for the next generation, not next election.
Translation by the Korea JoongAng Daily staff.