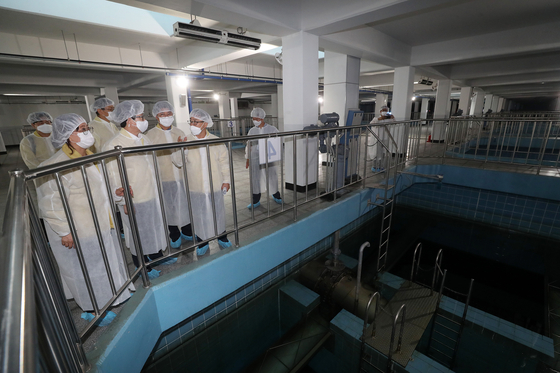 Environment Minister Cho Myung-rae and officials inspect the activated carbon filter at Ttukdo Arisu Water Purification Center in Seongdong District, northern Seoul, on Tuesday, after the Environment Ministry completed nationwide inspections into whether there are larvae entering the tap water of households. [NEWS1]

The Ministry of Environment Tuesday completed checking 435 water treatment plants nationwide and found larva-like organisms in the filter beds of three, but said they did not enter the tap water.

The Environment Ministry carried out on-site inspections of water treatment plants between July 17 and 26 after a scare about midge larvae appearing in tap water in parts of Incheon. There were reported sightings of similar worm-like organisms in kitchens and bathrooms throughout the country.

The ministry said it did not find any larva-like organisms in the tap water distribution process and consumption points nationwide.

However, a small amount of worm-like organisms were discovered in filter papers at three water purification plants in Hapcheon in South Gyeongsang, Gangneung in Gangwon and Muju in North Jeolla.

The ministry said that the bugs were not detected in the three plants' distribution reservoirs, nor in the tap water of households that they distributed to.

Shin Jin-su, an Environment Ministry official in charge of water integration policy, said in a briefing, “This indicates that bugs were caught in the filter papers and did not enter the tap water distributed to households.”

He noted that the plants in question, because of their high raw water quality, were being cleaned in seven day cycles, when it should have been executed every two to three days.

The ministry said that the cleaning cycles will become more frequent, insect traps will be installed in the facilities and sand in the filter beds changed in these plants in question.

On July 21, the Environment Ministry announced that larva-like organisms have been found at seven water treatment plants after conducting field inspections the previous week at 49 purification facilities with activated carbon filters, which were seen to have a higher risk of breeding such bugs.

Of these seven, two plants in Incheon’s Gongchon and Bupyeong had earlier been confirmed to have midge larvae after Incheon residents reported on July 9 of worm-like creatures in their tap water, prompting an investigation by the city government.

In the following weeks, reports of similar larva-like organisms were made in cities nationwide including Seoul, Busan, Cheongju and different parts of Gyeonggi, leading to an all-out inspection by the Environment Ministry.

Now, inspections of all 484 water treatment plants nationwide have been completed.

The Seoul Metropolitan Government on Tuesday likewise confirmed that there were no larvae in the capital’s tap water, stating that all 73 complaints of worm-like organisms received between July 14 and 26 were confirmed to be linked to external factors.

The city government conducted a joint field inspection with the Environment Ministry on July 16 and 17, and a joint public-civilian study on July 22 of all of Seoul’s water treatment facilities.

Researchers at the Seoul Water Institute analyzed water samples from complaints filed by residents, while the National Institute of Biological Resources examined specimens gathered from the water plants.

The Seoul Waterworks Authority concluded that based on these inspections, there were no issues with the water treatment facilities nor in the purification process in the capital.

Seoul officials said that the reported sightings of worm-like organisms in bathrooms and kitchen sinks included flies and moths hatching eggs in the drainage systems and were not related to contamination of the tap water.