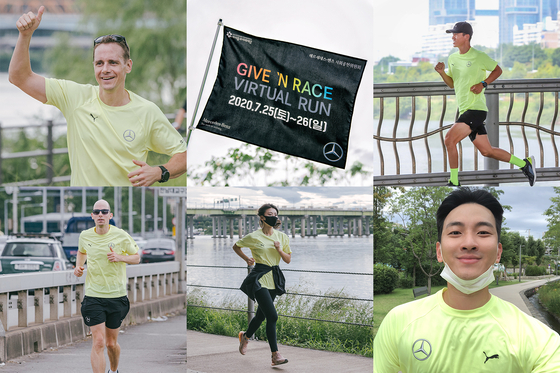 Mercedes-Benz Korea hosted the “Give ‘N Race Virtual Run” from July 25 to 26 as part of its corporate social responsibility (CSR) program.

As many companies have to cut back on their CSR programs due to the ongoing coronavirus pandemic, Mercedes-Benz worked hard to continue the true spirit of sharing through the event.

To avoid personal contact between the participants, the event was held as a “virtual run.” Over a 48-hour period, each of the 10,000 participants started the race individually by choosing a time and setting of their own.

The “untact” — a portmanteau of the prefix “un” and contact, meaning “no contact” — method of this year’s event made it impossible to gather in one place and start the race at the same time.

However, thanks to the removal of time and space restraints, people from different regions in Korea and 18 different countries were able to take part. About 60 percent of the participants were from the Seoul metropolitan area, ranging from babies to the elderly.

The total of 500 million won ($420,000) was collected from entry fees and donations. This will be donated to socially vulnerable children and teenagers through the Kids & Future Foundation and Korean Organization for Rare Diseases.

“Give ‘N Race,” which marks its fifth anniversary this year, has provided a fun running experience and played a key role in spreading the true spirit of sharing since its first race in 2017.

More than 50,000 runners have participated in the event over the years, raising 2.7 billion won in total.

Mercedes-Benz Korea’s CSR committee consists of representatives of three Daimler AG subsidiaries and 11 official dealers in Korea. Under the slogan “Mercedes-Benz Promise,” the company has actively participated in various CSR programs since 2014.

The committee’s “Mercedes-Benz Give” program focuses on donating through sports events. It has hosted various events such as “Give ‘N Race,” Give ‘N Bike” and “Give ‘N Golf” to promote charitable giving.

The committee plans to contribute to society by actively organizing donations programs to promote donations and share the spirit of sharing.