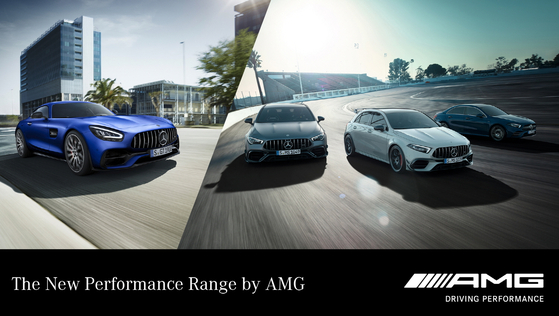 The new AMG models consist of a sedan, a hatchback, a coupe sedan and a sports car. Mercedes-AMG is a sub-brand of the German carmaker that offers high-performance models of stronger engines and matching steering wheels and driving modes.

“A growing customer desire for high-performance vehicles has been witnessed, especially among younger customers. In order to address their demand, the AMG brand is introducing a variety of performance models including the first-ever engine family 35 along with the 45 and the 45 S models,” said Mark Raine, vice president of product & marketing at Mercedes-Benz Korea.

The Mercedes-AMG A 35 4MATIC Sedan is based on the A 35 4MATIC Sedan, which was the first sedan variant under the A-Class mainly composed of hatchbacks, unveiled in February. The new A 45 4MATIC+ Hatchback is a high-performance variant of the fourth generation of the new A-Class Hatchback, debuted in Korea in September 2019. The new CLA 45 S 4MATIC+ Coupé Sedan is a high-performance variant of the second generation. The new CLA Coupé Sedan launched in Korea this past February.

All three have stronger engines than their predecessors that boast more output and torque, as well as the 4MATIC+ all-wheel drive system reserved for AMG lineups.

The AMG GT 2-Door Coupé is the second sports car solely developed by Mercedes-AMG. It’s a facelifted model of AMG’s first sports car introduced in Korea in 2015. It is equipped with a 4.0-liter V8 bi-turbo engine, which the company describes as comparable to racing cars.

The four models will be officially launched in the Korean market this August. The details and prices of each model will be unveiled upon their launch.