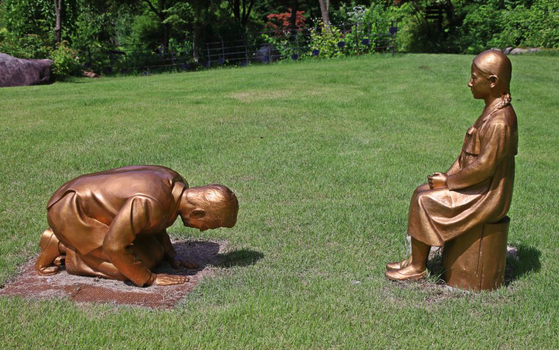 A pair of bronze statues, ’A Heartfelt Apology,“ is seen at the Korea Botanic Garden in Pyeongchang, Gangwon. [YONHAP]


A pair of statues of a man bowing contritely before a girl symbolizing Japan’s wartime sexual slavery victims is making waves amid speculation that the kneeling figure represents Japanese Prime Minister Shinzo Abe.

The bronze statues, entitled “A Heartfelt Apology,” are installed in the privately operated Korea Botanic Garden in Pyeongchang County, Gangwon. They started getting publicity in Korean media reports earlier this week.

Japan has reacted sensitively, warning if it the kneeling man indeed represents Abe, it could have serious repercussions on bilateral relations.

Addressing media reports that the kneeling man resembles Abe, Yoshihide Suga, the Japanese cabinet secretary, said in a press briefing Tuesday that while he has not verified such reports, this would “not be allowed under international courtesy.”

Suga added, “If the reports are true, I believe this could decisively effect Korea-Japan relations.”

Tokyo has protested the installation of bronze statues representing the tens of thousands of young women and girls who were forced into sexual slavery by the Japanese military before and during World War II, euphemistically referred to as comfort women. Japan has called for the removal of the original statue, the so-called Peace Monument, in front of the former Japanese Embassy in central Seoul and a similar statue installed near its consulate in Busan.

Seoul’s Ministry of Foreign Affairs responded with restraint on the matter, saying that it will refrain from remarking on private events unrelated to the government.

Kim In-chul, spokesman of the Foreign Ministry, said in a press briefing Tuesday on Suga’s remarks, “As the Japanese side said, there is a need for international comity,” referring to the legally nonbinding diplomatic practice of courtesy. “We believe in the need to consider international courtesy for a foreign leader, regardless of the country.”

Yasuhide Nakayama, a lower house lawmaker and chairman of the ruling Liberal Democratic Party's foreign affairs committee, was reported in Japanese media Wednesday as having said in a press conference the previous day that the statue installation represented “abnormal behavior” and questioned if the Korean government shouldn’t “bear some kind of supervisory responsibility.”

However, Kim Chang-ryeol, the head of the Korea Botanic Garden, told reporters Tuesday that the bronze monument was not specifically created with Prime Minister Abe in mind and more widely represented the desire for “a person holding responsibility to sincerely apologize.” But Kim acknowledged that such a responsible person could be Abe or another Japanese leader.

The statues were made in 2016, but the garden remained closed due to a fire and reopened only recently in June.

The botanical garden intended to hold an unveiling ceremony for the monument on Aug. 10, but the event was canceled amid the controversy regarding the statues.

However, the operator of the garden has no plan to remove the statues.

“As I have said many times, I have never said that the statue is Japanese Prime Minister Shinzo Abe,” Kim Chang-ryeol told the JoongAng Ilbo on Wednesday. “Before you can get rid of the statues, you will have to get rid of me first.”

Kim pointed out that this was a statue on private grounds.

He said “it does not make sense” for the Japanese government to request the removal of the statues, adding their installation in his garden “is a private matter that the government and external agencies shouldn’t interfere.”

Korea and Japan attempted to settle the so-called comfort women issue through a 2015 agreement.

On Dec. 28, 2015, a controversial deal aimed at “finally and irreversibly” resolving the wartime sexual slavery issue was struck between Japan’s current Abe administration and the Park Geun-hye government, which included an apology from Tokyo and a 1-billion-yen ($9.5-million) fund for the victims. Some victims and civic groups criticized the agreement for its failure to recognize Japan’s legal responsibility for its war crimes and also Tokyo’s calls for the removal of the comfort women statue in front of the Japanese Embassy.

The Moon Jae-in administration has since called the agreement “flawed” and scrapped the Tokyo-funded Reconciliation and Healing Foundation, but has stopped short of overturning the deal.

The two countries have faced deteriorated bilateral ties over historical issues, including compensation of forced labor victims, and Japan’s export restrictions on Korea.

The end of Abenomics

The end of Abenomics (KOR)