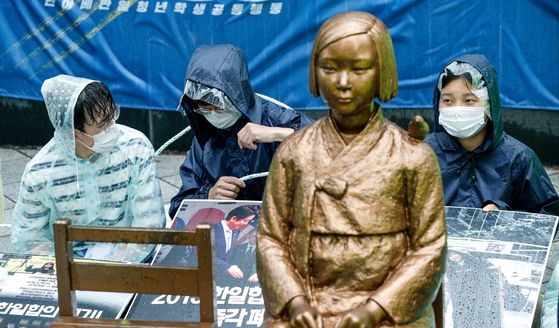 University students tie themselves to a statue symbolizing ’comfort women“ victims in front of the old Japanese Embassy in central Seoul Wednesday and stage a sit-in protest after the organizers of weekly rallies to resolve the issue of Japanese wartime sexual slavery lost their usual turf to a conservative group. [NEWS1]

For the first time in 28 years, activists advocating for victims of Japan's wartime sexual slavery through weekly rallies near the Japanese Embassy in central Seoul have been pushed off their usual turf by a conservative group.

The Korean Council for Justice and Remembrance for the Issues of Military Sexual Slavery by Japan, recently mired in controversy over financial transparency, has organized weekly Wednesday rallies demanding an apology and compensation from Tokyo for the so-called "comfort women" issue since 1992.

But the Korean Council was forced to hold their 1,445th Wednesday rally about 10 meters from their usual spot by the Peace Monument, an iconic bronze statue symbolizing the comfort women victims. The statue sits in front of the old Japanese Embassy in Jongno District.

Because the Jongno police permit groups to apply to hold rallies on a first-come, first-served basis, a conservative group, Freedom Union, managed to secure the location by registering its own rally before the Korean Council.

The Freedom Union has called for scrapping the Korean Council and has urged its former head, ruling Democratic Party Rep. Yoon Mee-yang, to step down. The group had waited for the opportunity earlier this week, and was able to secure the site for daily protests from June 24 to mid-July.

The Wednesday rally organizers had to forfeit their symbolic location and instead registered for a nearby location in front of the Yonhap News Agency building in central Seoul.

About 400 police officers were dispatched to the scene that day to prevent any clash between the progressive and conservative activists, but no clashes were reported. Police stressed they will make sure the Peace Monument is not damaged.

Separately, a group of 20 university students with a progressive youth group opposed to the Shinzo Abe administration have held a sit-in protest by the Peace Monument overnight since Tuesday. The Freedom Union has advocated for the statue's removal, and the students tied themselves to the statue to protect it. Police told the students to disperse, but they refused.

“Various civic groups including women’s rights, religious and youth groups voluntarily organized and became one to hold rallies to demand that the Japanese government take responsibility,” Lee Na-young, president of the Korean Council, said at the rally Wednesday, held in pouring rain. “We stare into an abyss of sadness that we cannot go near the Peace Monument.”

She added, “Regardless of the anti-history and anti-humanity acts that are denying the historic significance of the location and deeply harming the dignity and honor of the victims, we still stand here today. Even if we are pushed away and oppressed and torn to pieces, we will stay in this spot.”

The Korean Council is currently being investigated by prosecutors for alleged accounting fraud and misused donations that spanned years.

Lee Yong-soo, a comfort woman survivor and longtime rights activist, held a press conference May 7 that brought the issue to light. She questioned the financial transparency and the integrity of the civic group and Rep. Yoon. Lee also declared she will no longer participate in the weekly Wednesday rallies in Seoul.

Yoon was elected as a proportional lawmaker of the ruling Democratic Party in April, and has rejected most of the allegations against her for her role as the former head of the Korean Council.

The civic group, previously named the Korean Council for the Women Drafted for Military Sexual Slavery by Japan, has since 1990 sought justice for the young girls and women forced into sexual slavery by the Japanese military before and during World War II.

The rallies organized by the Korean Council were at their peak attended by hundreds of activists and students. They initially kicked off in January 1992 to protest a visit by then-Japanese Prime Minister Kiichi Miyazawa.

The Peace Monument was installed by civic groups in front of the Japanese Embassy in December 2011, marking the 1,000th Wednesday rally, and Tokyo has frequently called for its removal.

The progressive student activists called for protecting the statue while a group of conservative YouTubers held a counter-protest nearby the previous day.