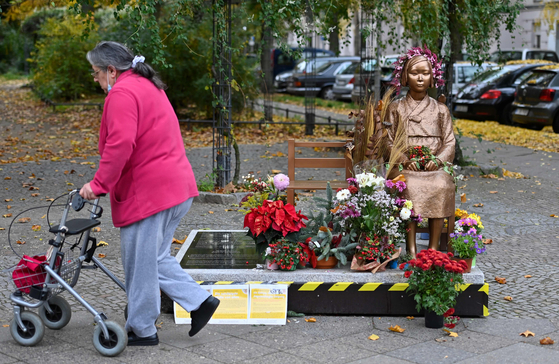 A pedestrian passes a statue representing victims of Japanese wartime sexual slavery that is decorated with flowers in Berlin’s Mitte district on Oct. 27. Civic activists fought to retain the 'comfort women' statue after the Japanese government requested its removal to German officials. [AFP/YONHAP]

The local council of a Berlin district has adopted a resolution seeking to permanently install a bronze statue of a girl symbolizing the victims of Japan's wartime sexual slavery — a rejection of Tokyo's repeated attempts to get it removed from a public street in the German capital.

Berlin’s Mitte district council passed the resolution Tuesday by a vote of 24 to four, calling to keep the statue in the district and extend its installation period for at least another six weeks, to September 2021. It also called to seek ways for the permanent installation of the statue in Mitte.

The “Statue of Peace” was installed on a public street in Mitte on Sept. 25 by a local civic group with the approval of district authorities to memorialize the women who were victims of wartime sexual violence. Soon after the unveiling ceremony, the Japanese government asked Berlin for its removal, leading the Mitte district office to issue an order on Oct. 7 for the civic group that installed it to remove the statue by the following week.

The statue includes an inscription stating that Japanese troops abducted women from Asia-Pacific countries to be sex slaves during World War II. These sexual slavery victims are euphemistically referred to as "comfort women."

In turn, the Korea Verband, the Berlin-based civic group that installed the statue, and other German and Korean activists, fiercely protested the removal. The group filed for an injunction to suspend the order to remove the statue, while hundreds of protesters marched from the location of the statue to the Mitte district office the day before the deadline, calling on the council to keep the statue where it is.

The Mitte district office in response withheld its order to remove the statue, noting that it “condemns all forms of sexual violence against women,” regardless of time, place or cause.

The Mitte district council on Nov. 7 adopted a resolution urging municipal authorities to retract the order to remove the statue.

This resolution guaranteed the statue's original installation period, through Aug. 14, 2021. 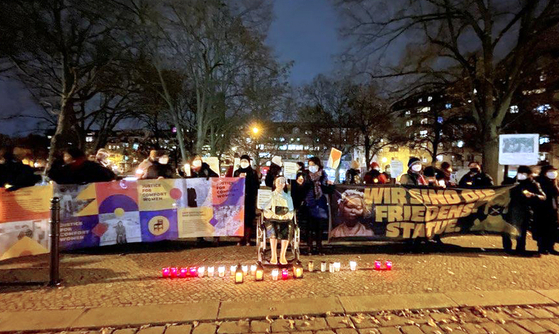 Civic activists gather in front the Mitte district office in a rally calling for the permanent installation of the Statue of Peace in a public street in Berlin. The Mitte district council adopted Tuesday a resolution seeking to permanently keep the statue. [YONHAP]

Japanese authorities have often denied the forceful nature of the recruitment of tens of thousands of girls and young women from Korea and other Asian countries to serve in the Japanese military’s frontline brothels before and during World War II. Such historic disputes, dating back to Japanese 1910-45 colonial rule over Korea, have long been a source of diplomatic friction between Seoul and Tokyo.

However, Katsunobu Kato, Japan’s chief cabinet secretary, in a press briefing Wednesday expressed “deep regret” over the Mitte council’s decision, saying that it runs contrary to the Japanese government’s stance.

He added that the Japanese government plans to reach out to many officials to convey Japan’s position and to "continue to request the speedy removal of the statue.”

Tokyo has also called for the removal of the original “Statue of Peace,” located in front of the former Japanese Embassy building in Seoul and another one near its consulate in Busan. Similar statues representing comfort women victims have been erected around the world, including two others on private property in Germany.