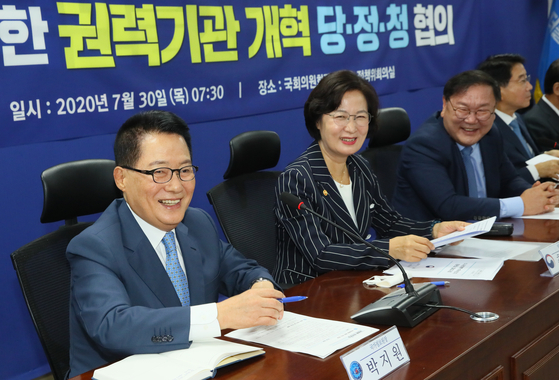 
The ruling party, Blue House and ministers on Thursday discussed a plan to restrict the prosecution’s investigative powers and restructure the country's main intelligence agency.

Following the meeting, the ruling party vowed to use its majority in the National Assembly to speedily pass reform laws before the end of this year.

According to Rep. Cho Jeong-sik, chief policymaker of the DP, the participants agreed to a plan to limit the scope of direct investigations by prosecutors. Police will be given more powers to conduct investigations in most cases.

“Prosecutors will be limited to conduct direct investigations only when it is absolutely necessary,” Cho said. “We want to change the hierarchical relationship between the prosecution and the police into a cooperative relationship.”

Prosecutors will be allowed to investigate only six types of allegations concerning corruption, the economy, civil servants, elections, the defense industry and large-scale disasters. Drug trafficking will be dealt with as an economic crime and cyber attacks will be seen as large-scale disasters, Cho said.

According to Cho, the Ministry of Justice will change its ordinances to specify whom among public servants prosecutors will have jurisdictions over.

Sources informed about the reform plan said prosecutors will have powers to investigate only civil servants above grade 4. There are nine grades in the officialdom, with grade 1 being the highest.

For corruption investigations, prosecutors will be allowed to directly investigate cases when the amount of a bribe involved is over 30 million won ($25,000).

Prosecutors will be limited to investigate economic crimes such as fraud and breach of trust only when the amounts involved are over 500 million won.

Consultations between the prosecution and the police will be mandatory to assure their cooperation, according to the plan.

Proposals to award more autonomy to the police were also discussed. While the administration and the ruling party emphasized measures to weaken the powers of the prosecution, planned changes to restructure the police organization were kept to a minimum.

The DP, Blue House and the government decided to scrap their original plan to separately operate national police and regional autonomous police, because such a change will be too costly. They decided to maintain the current organizational structure of the police, but divide it into three different teams.

State police will be supervised by the National Police Agency and handle intelligence gathering and security operations.

Regional autonomous police will be supervised by police commissions under the offices of mayors and governors. They will handle local crimes and traffic issues.

A National Investigation Headquarters will be created to oversee investigative affairs nationwide, according to the plan.

The ruling party and the government also agreed to overhaul the NIS. Its name will be changed to the External Security Intelligence Service to reflect greater transparency.

The spy agency’s domestic political operations and anti-espionage operations will be shut down.

Outside oversight over the spy agency, such as the National Assembly’s Intelligence Committee and Board of Audit and Inspection, will be reinforced.

DP Rep. Kim Byung-kee, who is on the Intelligence Committee, will draft a bill to reflect the changes.

Many of the reforms discussed Thursday were projects left over from the 20th National Assembly. Since President Moon Jae-in took office in May 2017, he has been promoting reforms of the prosecution to weaken its powers.

Over the past years, the DP tried to change the laws governing the prosecution, police and the NIS, but faced fierce resistance. Only a few reform bills, including a controversial plan to launch the Corruption Investigation Office for High-Ranking Officials (CIO), were passed in December.

The DP is making another push to pass outstanding reforms in the 21st National Assembly as it controls a so-called super-majority. The DP controls 176 seats in the 300-member legislature, enough to pass any bills except for a constitutional amendment.

Interior ministry lays out ways it will control police