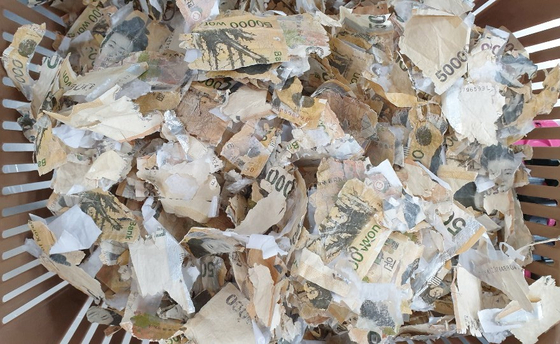 A basket of burned 50,000 won ($42) bills. According to the Bank of Korea, the owner of the bills, who lives in Ansan, Gyeonggi, tried to sanitize 23 million won worth because of concerns about Covid-19 by putting them in the washing machine and then drying them in a clothes dryer. Another person, who lives in Incheon, burned 5.25 million won worth of bills by putting them in a microwave. The central bank said in the first half of this year, 2.7 trillion won worth of bills were damaged due to soaking or burning. A total of 226.6 million 10,000 won bills were destroyed, while 85.6 million 1,000 won bills were destroyed. [BANK OF KOREA]