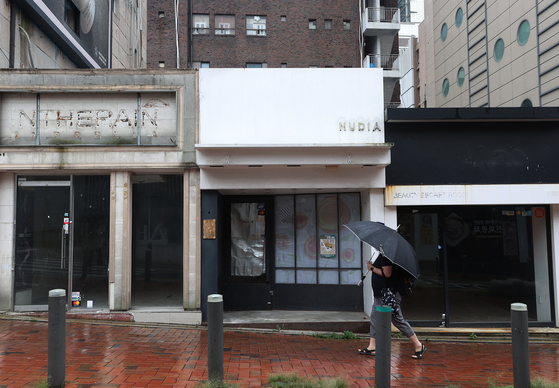 Stores around Ewha Womans University in Seoul on Wednesday are shut as the coronavirus pandemic has taken a toll on business. [YONHAP]


Shuttered stores are an all too common sight around Seoul as business owners reach the end of the line squeezed between the lack of customers and fixed expenses.

The struggles are evident in a Bank of Korea release issued Wednesday showing that businesses are borrowing at record rates, many simply taking out loans to fund operating expenses in order to stay afloat as the pandemic takes its toll.

In the second quarter, businesses in Korea borrowed a total of 69.1 trillion won ($58.2 billion), a quarterly record, bringing their loans outstanding to 1,328.2 trillion won.

These businesses have suffered greatly as the pandemic and social distancing measures have resulted in a drop in retail foot traffic, travel and entertainment.

The wholesales, retail, food and lodging category, which has a high ratio of self-employed businesses, borrowed 18.8 trillion won in the second quarter, an all-time record.

That's a 17 percent increase year-on-year from the 16.1 trillion won borrowed a year earlier.

Manufacturing, which has 29 percent of the total business loans outstanding in the country, borrowed 17.2 trillion won in the second quarter, a 9.6 percent increase.

“It seems there has been an increase in loans used for working capital as businesses struggle from Covid-19,” said Song Jae-chang, head of the financial statistics team at the central bank.

Working capital is money that is used to cover day-to-day operating expenses and other short-term obligations.

Of the manufacturing loans made in the second quarter, 75 percent went toward working capital. This suggest that that many of the businesses are borrowing just to keep their business running.

The central bank official added that the government's encouragement of borrowing may have contributed to the increase in business loans.

Easy money has also encouraged businesses to take out loans. In March, the central bank lowered the nation’s key interest rate from 1.25 percent to 0.75 percent. It was further reduced to 0.5 percent as the pandemic kicked in.

Korea is already in a technical recession as growth has declined for two consecutive quarters. In the second quarter, GDP fell 3.2 percent, the sharpest fall since the fourth quarter of 2008.

The situation could get worse as the government has implemented tougher social distancing standards since the virus made a comeback in the middle of August.