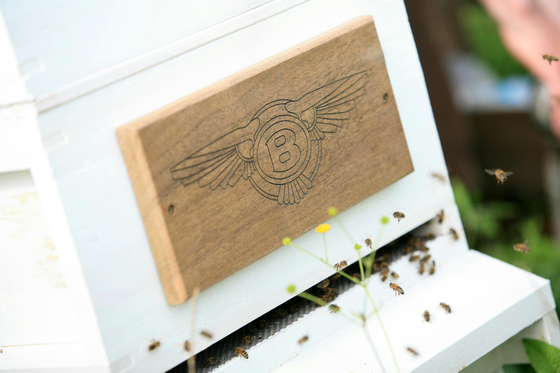 A Flying B emblem was engraved on a beehive Bentley is taking care of. [BENTLEY]


Two luxury British brands, R and B, are competing over the title of the biggest beekeeper in the industry since 2017.

R has set up a habitat for 250,000 honeybees in a 17,000-square-meter site near its main factory. It manages a forest of more than 500,000 trees and wildflowers. B has increased the number of bees raised near its factory to 300,000. In order to create an environment that indigenous English bees like, more than 100 trees were planted and a wildflower habitat was created.

The two brands are Rolls Royce Motorcar and Bentley. The two companies producing high-end cars have been competing in beekeeping since the United Nations proclaimed May 20 as World Bee Day in 2017. In order to preserve endangered bees, the two companies are pursuing a cause unrelated to their main business.

Rolls Royce raises bees in a hive made by masters who produce custom cars. The honey is named Rolls Royce Honey and is gifted to VIP customers. Bentley calls their bees “Flying Bee,” as in the “Flying B” emblem on Bentley cars.

With the spread of Covid-19, the movement of bees has decreased drastically. One of the reasons to prevent bees from going extinct is actually for the survival of humanity. Bees move pollen and pollinate plants that account for one third of global food production.

With the increase of natural enemies and destruction of the ecosystem, the number of bees is drastically decreasing globally, and movement of humans is also restricted. Among 20,000 types of bees worldwide, more than 8000 are at risk of extinction even without the Covid-19 pandemic. Research showed that the number of bees has decreased by 30 percent compared to 20 years ago.

Albert Einstein reportedly said that if bees went extinct, humans would also disappear in four years. It is a wrongly attributed quote published in a beekeeping magazine in Canada in the 1940s, but the importance of preserving bees is evident. When the balance in ecosystem falls, it won’t be easy for the humans, who are a part of the ecosystem, to survive.