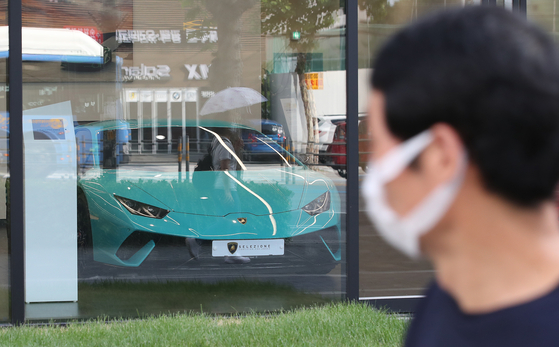 A passerby walks in front of an Automobili Lamborghini store in downtown Seoul in August. [NEWS1]

A total of 252,242 new imported cars were registered this year through November in Korea, up 3.6 percent on-year, according to the Korea Automobile Importers and Distributors Association.

Of them, 59,435 were luxury cars priced at over 100 million won. That's up 37 percent on year and was 23 percent of imports sold during the period.

For cars costing more than 150 million won, Mercedes-Benz was No. 1 followed by BMW at No. 2 and Porsche in the third spot.

"Luxury imported cars have become especially popular this year as more people tend to splurge on cars after the pandemic," said Kim Pil-soo, an automotive engineering professor at Daelim University.

"The imported car market is likely to grow further next year," Kim added. "More consumers will seek imported cars as Hyundai Motor and Kia are heavily affected by the shortage of auto semiconductors, while Renault Samsung Motors, SsangYong Motors and Chevrolet are facing problems with their manufacturing systems."