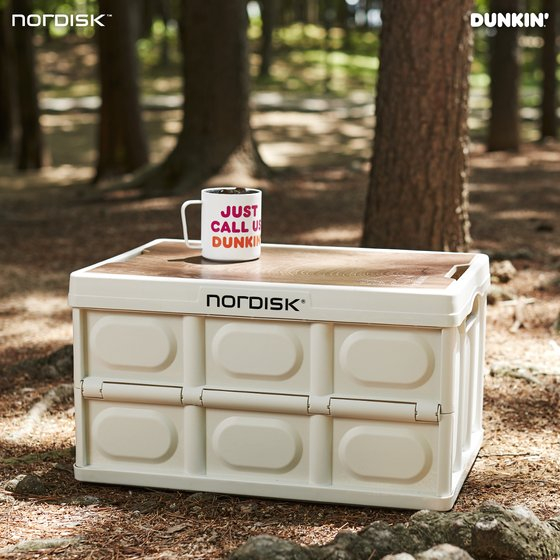 
Camping now being all the rage due to the pandemic, food and beverage companies are getting a piece of the action with promotion items designed to draw in campers and camping wannabes.

In May, Starbucks Korea started offering a camping chair and a “summer ready” bag as rewards in its 2020 summer e-frequency program. Under the e-frequency program, which is similar to the stamp-based loyalty schemes that many cafes run, Starbucks offers its own designed merchandise instead of free coffee. The demand for Starbucks Korea’s camping chairs and bags was high, and they ran out immediately after they were released to the public.

Dunkin’ recently collaborated with Denmark-based outdoor equipment company Nordisk and came up with a “camping folding box.” The small-sized, box-shaped table that can be used at camp sites costs about 16,900 won ($14) and includes a 10,000 won Dunkin’ gift card. On July 27, when some 30 percent of total supply was released through the company’s app, the table was out of stock in less than two hours. The rest sold out in just a few hours when released the next day at retail outlets.

Lotteria introduced a box-shaped camping table in partnership with Pepsi. Customers who order a burger set at Lotteria can purchase the table for 9,500 won, while people who order a single burger can get it for 16,900 won. The table was available at Lotteria stores from July 31, and a person can purchase up to two at a time. 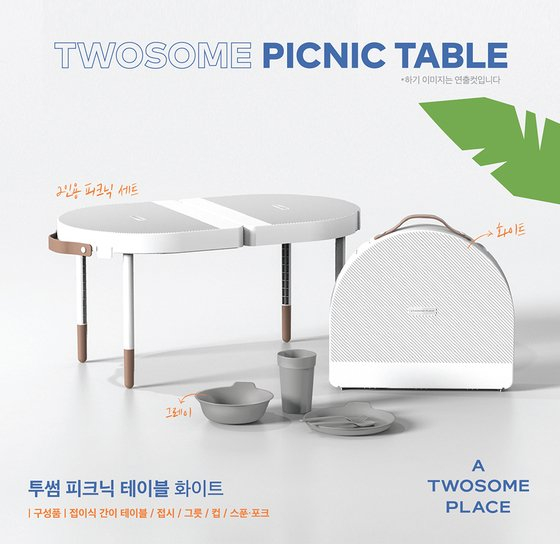 
Franchise cafe A Twosome Place entered the competition with its own designed picnic table.

In June, A Twosome Place introduced the picnic table in two colors — blue and green — in partnership with e-commerce operator 11st. After the merchandise sold out, the company introduced a white model on July 27.

The picnic table includes tableware for two. Unlike the others, the Twosome Place model is not sold as a bundled product and can be purchased on its own for 27,900 won.

Lotte Group’s Angel-in-us coffee shop chain offered three camping pouches for 5,000 won for customers who bought a banh mi sandwich and spent a total of 12,000 won. People who spent more than 20,000 at the shop were given with the pouches for free. 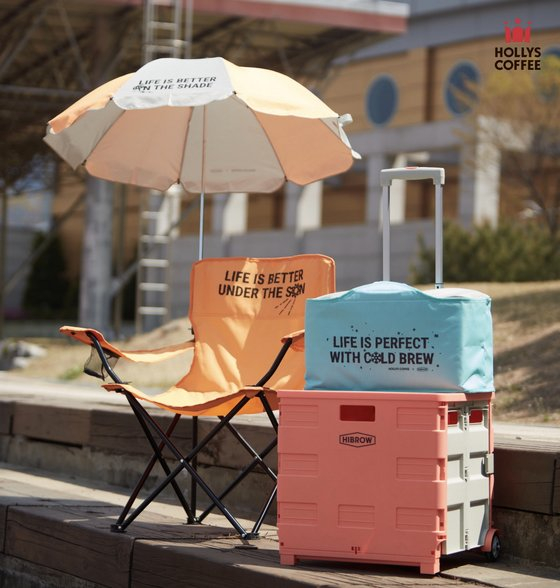 Hollys Coffee’s camping-related limited-edition products that are made in cooperation with Hibrow. [HOLLYS COFFEE]

In June, Hollys Coffee released diverse camping items, including chairs and parasols in cooperation with Hibrow, a furniture and lifestyle company. The promotional event will run until the end of the month.

Camping equipment sales got a boost during the Covid-19 pandemic.

According to e-commerce site Gmarket, sales of tents were up 55 percent between May and July 29 compared to a year earlier. During the same period, sales of camping equipment, such as tables and chairs, increased by 34 percent while sales of cooking items, such as burners, grew by 19 percent.

One motivation that drives people to hoard limited-edition merchandise is the fear that the promotional period is the only time that they can purchase the items. Seasonal merchandise normally comes in a few different color options, and the more popular versions are likely to run out quickly. Companies try to set reasonable and affordable prices.