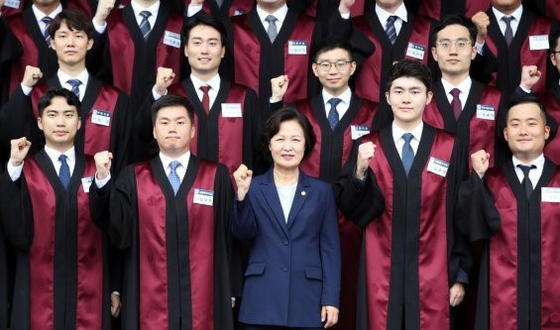 Justice Minister Choo Mi-ae, center, poses for a group photo with newly appointed prosecutors at the commencement ceremony in the central government complex in Gwacheon, Gyeonggi, on Monday. [YONHAP]


Prosecutor General Yoon Seok-youl on Monday called on newly appointed prosecutors to defend democracy against “dictatorship and authoritarianism” in an ideologically charged speech that echoed his ongoing feud with the Ministry of Justice.

Yoon’s address to initiates of the country’s state prosecution service was delivered at a government complex in Gwacheon, Gyeonggi, and struck a sharp political tone unusual for a figure legally required to uphold partisan neutrality.

“Liberal democracy, the main principle behind our Constitution, does not mean valuing freedom while ignoring equality,” Yoon said. “It means [upholding] real democracy that rejects dictatorship and authoritarianism under the disguise of democracy.”

Stressing that corruption and misconduct by the powerful victimize all citizens, Yoon called on prosecutors to “strictly carry out” their authority to enforce laws “in any circumstance.”

Yoon’s remarks appeared directed at the Moon Jae-in administration — and Justice Minister Choo Mi-ae in particular — over their attempts to rein in the authority of the state prosecution agency as part of an ambitious reform package.

Once hailed as a maverick reformist by those who favored major changes to Korea’s law enforcement institutions, Yoon has resisted the administration’s efforts to curb the prosecution agency’s vast powers as the country’s top prosecutor. Under his watch, prosecutors mounted one of the most dramatic probes in recent memory against the family of former Justice Minister Cho Kuk, the main architect of the prosecutorial reforms, in what some analysts called a naked attempt to derail the reform efforts.

The friction between Yoon and Choo became especially pronounced last month, after the minister invoked a rare order shutting down a review of the validity of an ongoing investigation into Han Dong-hoon, a senior prosecutor closely aligned with Yoon.

The order was perceived as a slight to Yoon’s authority, but the top prosecutor eventually acquiesced to Choo’s orders in recognition of the direct chain of command.

That investigation generated even more controversy last week after a scuffle broke out between Han and the lead prosecutor in the case, while prosecutors were executing a search warrant against Han last week.

A panel of experts under the Justice Ministry late last month also proposed a series of recommendations that would weaken the powers of the prosecutor general, including the office holder's right to direct and supervise individual investigations.

The proposals prompted heavy resistance from prosecutors already incensed by the administration’s wide-ranging attempts to undermine and redistribute their authority.

Yoon has not publicly commented on the recommendations or the ongoing investigation into Han. But he is believed to have grown deeply discontented with the Justice Ministry.

“For the state prosecution service to recover the public’s trust, it must carry out its powers in a measured and balanced way, with human rights always at the top of its considerations,” she said.

“If [prosecutors] exercise investigative and indictment powers without checks and controls from the exterior, there will inevitably be abuses of power and human rights violations.”