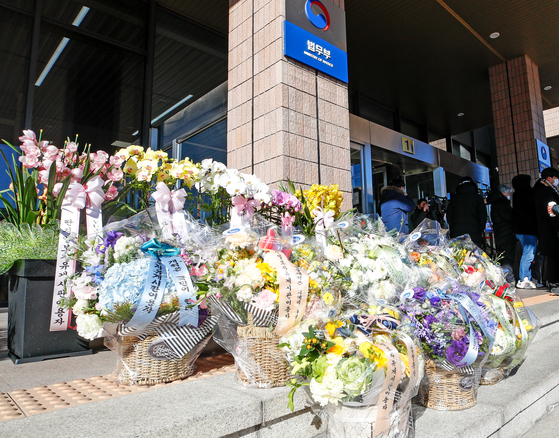 Flowers laid out in front of the Justice Ministry sent by supporters of prosecutorial reform who want the ministry's disciplinary committee to decide on a strong punishment for the renegade top prosecutor. [YONHAP]


A committee under the Ministry of Justice convened for the second time in less than a week on Tuesday to decide on a punishment for Prosecutor General Yoon Seok-youl.

The hearing began Tuesday morning, picking up from an inconclusive session called last Thursday to decide whether Yoon was liable to be penalized for six counts of ethical and legal misconduct, including allegations that he ordered illegal surveillance of a judge and breached his obligation to remain politically neutral.

At stake is Yoon’s fate as the country’s top prosecutor. Any verdict stronger than a warning, the lightest form of reprimand, is likely to trigger a rancorous court battle between Yoon and the Moon Jae-in administration.

In events that mirrored Thursday’s, the committee of four rejected motions by Yoon’s lawyers to disqualify three of the four participants for alleged bias against him.

Yoon, who denies all charges, again did not attend the hearing and was instead represented by his three lawyers.
According to the law governing the process, the disciplinary committee is comprised of seven members including the justice minister and vice minister of justice. The justice minister picks the other five — two prosecutors and three outside experts.

But Justice Minister Choo Mi-ae cannot participate in the process, as she is the petitioner who brought the charges against Yoon. With one of the outside members not attending the hearing and another, Justice Ministry Internal Inspection Bureau chief Shim Jae-cheol, recusing himself, the committee was reduced to four — the bare minimum necessary to reach a conclusion.

After taking a lunch recess, panel members spent much of the hearing on Tuesday questioning witnesses who testified on Yoon’s alleged misconduct.

Like a real court trial, Yoon’s lawyers also had the chance to question four of the eight witnesses who showed up. Witnesses are not required to attend the hearing.

Shim, who controversially recused himself as a panel member on Thursday after participating in a vote to reject motions to disqualify committee members, was also selected as a witness later that day, but the panel on Tuesday decided to remove him as a witness.

The length of the questioning delayed the process until late in the evening, and no verdict had been reached as of press time Tuesday.

There are five options available to the committee in the way of a punishment for Yoon. The lightest — a warning — would be a slap on the wrist and is deemed the most unlikely. Other options include a pay cut and suspension from duty.

The most serious penalties both involve Yoon’s removal from office as prosecutor general, but the stronger of the two also cuts his pension by one-quarter and prevents him from opening a legal practice for three years. The lighter alternative forbids legal practice for two years.

Any action stronger than a warning requires a sanction from President Moon Jae-in, who appointed Yoon into office last year. The Blue House has said Moon will sign off on any decision reached by the disciplinary panel.

Such a conclusion could present a major political burden for the administration, which has already seen its approval plummet over the last month as the feud between Choo and Yoon intensified.