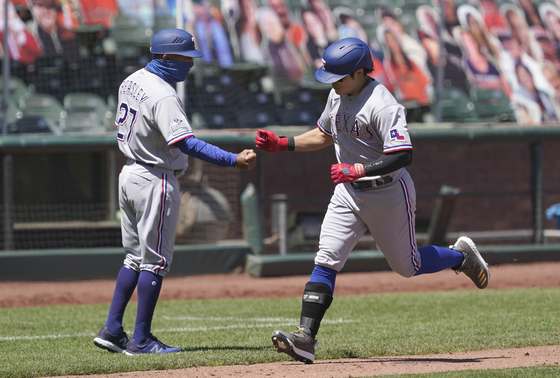 Choo Shin-soo of the Texas Rangers rounds the bases after hitting a two-run home run during a game against the San Francisco Giants at Oracle Park on Sunday. [AP/YONHAP]

Choo hit his first home run of the season during the first of the three-game weekend series against the San Francisco Giants at Oracle Park on July 31.

Although the Rangers suffered another 7-3 loss on Saturday, they didn't get swept in the series, as they managed to finally pick up a win on Sunday. In addition to the Rangers victory, Choo continued his streak on Sunday as he belted his second home run of the season.

Choo smacked a two-run homer off the Giant's starter Jeff Samardzija over the right field wall into McCovey Cove in the top of the fifth inning at Oracle Park in San Francisco. The Rangers beat the Giants 9-5.

Batting lead off, Choo struck out and grounded out in his first two plate appearances.

In the fifth inning, with the Rangers leading 3-1, he blasted the homer on a 2-0 pitch with one runner on base.

Choo walked in the seventh and grounded out in the eight inning.

“Choo looks pretty good right now,” Ranger manager Chris Woodward was quoted as saying on MLB.com. “He could have four home runs right now. He got robbed on one at our place and hit one the next day he said was hit even harder. The consistency is starting to show. When Choo’s going good, he controls the strike zone, he gets on base and hits home runs. We are starting to see a little bit of that.”

Evan Longoria and Chadwick Tromp homered for the Giants in the sixth inning to tie the game at 5-5. But the Rangers clinched the 9-5 victory thanks to a sacrifice fly by Willie Calhoun and a three-run homer by Joey Gallo in the top of the seventh.