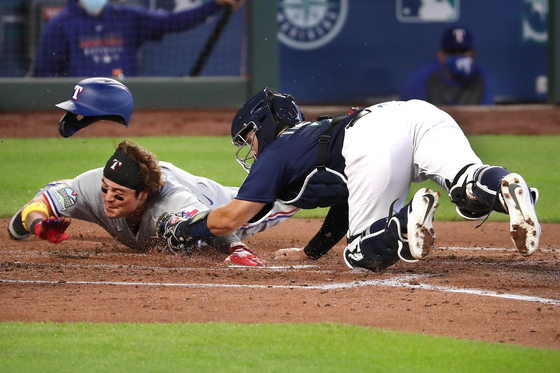 Choo Shin-soo of the Texas Rangers, left, slides to home plate during a game against the Seattle Mariners at T-Mobile Park on Sept. 7. [GETTY IMAGES/YONHAP]


Choo Shin-soo of the Texas Rangers was hoping for another strong season, but things are not working out in his favor.

The Rangers announced on Wednesday that Choo will be added to the Rangers’ injured list (IL) after spraining his wrist.

Choo picked up the injury while sliding to home plate during a game against the Seattle Mariners on Monday. Although the veteran was safe on the play, he seemed to be in pain as he jammed his hand into the ground while sliding.

Following the game, Rangers’ manager Chris Woodward said that there weren’t any structural damages based on the X-ray and that he hoped to see the veteran designated hitter back in the roster.

But unfortunately, that wasn’t to be.

If Choo makes a fast recovery, he will be able to return to the lineup on Sept. 18.

Although there isn't that long left in the shortened MLB season, due to end by the end of September, Choo is determined to return to the lineup before the season finishes. This is already the second time that Choo has been injured this season. Last month, the 38-year-old had to miss a few games due to a calf injury.

“I never want to think about finishing the season with any injury,” Choo was quoted as saying on MLB.com. “That is important. Nobody else may care about it, but just for myself, I don’t want to finish the season with an injury.”

Choo is playing the last year of his big seven-year $130 million contract with the Rangers. Since Choo will once again earn free agency after this season, his injury could pose a serious threat to his future career.

This season, Choo has appeared in 32 games for the Rangers with five home runs, 13 walks and 15 RBIs with a 0.229 batting percentage. Although there were rumors he could be traded, Choo has stayed put in his role as the Rangers’ leadoff.

Last year, Choo’s season was all about home runs. He had one of the best seasons of his career with a new career high in home runs in a single season, at 24. Along with that, he made headlines by hitting his 200th home run after 15 years in the majors. By doing so, he became the first Asian player in the major league to ever hit more than 200 home runs.

This season, Choo once again set another record among Asian major leaguers in RBIs. Choo currently has career RBIs at 782, beating Ichiro Suzuki’s record of 780.

Due to the coronavirus pandemic, the major league shortened its regular season to 60 games. Since the Rangers are not looking at a shot at the postseason this year, as they are ranked at the very bottom of the American League West standing with 15 wins and 27 losses as of Wednesday, the end to their season is fast approaching.

Choo is currently the oldest Korean to play in the major league, and, aside from the occasional injury, his age doesn’t seem to have held him back.