Gov't to allow 50-floor apartments to cool off market

Gov't to allow 50-floor apartments to cool off market 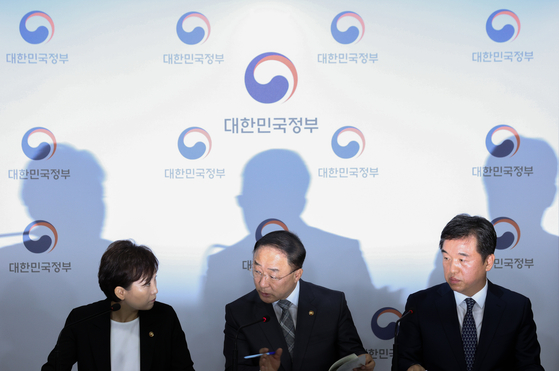 
The government announced plans to boost the supply of apartments in greater Seoul by allowing complexes that redevelop to build as high as 50 stories, as well as developing government-owned land including a golf course in northern Seoul.

The announcement represented the 23rd set of real estate measures since the Moon Jae-in administration took office in May 2017. They have all been intended to cool real estate prices.

On Tuesday, a task force led by Finance Minister Hong Nam-ki laid out the plan, which will include 50,000 units in redevelopment projects in the next five years.

In Seoul, the maximum floor area ratio for redevelopment (also called reconstruction) projects is 250 percent of the original area while the maximum height for apartment towers is 35 stories.

The new measures allow a maximum floor ratio area of 500 percent and buildings as tall as 50 floors.

However, there are conditions.

These two public housing developers will help speed up government permissions for redevelopment of apartment complexes. However, these two institutions will also have a role in key issues including selection of construction companies.

The participation of these two institutions will need to be approved by two-thirds of the owners of apartments in the complexes.

Some 50 to 70 percent of the additional apartments that will be built thanks to the easing of the floor area ratio restriction and the additional floors must be donated to the government. Half will be leased and half sold to low-income households, newlyweds and young people.

Hong claimed the government will be able to recollect 90 percent of the profits made from reconstruction of apartment complexes.

That raises the question of whether complexes will be willing to agree to government terms for redevelopment.

Several apartment complexes in the past have considered raising the height of their apartments to 50 floors or near that, including an apartment complex in Apgujeong-dong and one in Jamsil-dong, both in southern Seoul. They could consider the new government measures.

The government said it expects to secure 20,000 units in such large-scale redevelopment projects.

In addition, the government plans 33,000 apartments on its own land, including the military-owned golf club, the former U.S. military base in Yongsan District, southern Seoul, as well as several locations where state-owned institutions were situated.

The Taeneung golf club in northern Seoul, owned by the Korean military, could be the site of 10,000 apartments.

Hong said the golf club is the only greenbelt zone that the government will be allowing apartments to be built on.

“More than 98 percent of the Taeneung golf club has a low rating in its greenbelt environment evaluation,” Hong said. “As such it has low value in preservation for environmental purposes.”

However, the finance minister said other greenbelts will be preserved, echoing a similar comment by President Moon Jae-in.

Land Minister Kim Hyun-mee said the supply of new government-leased apartments will stabilize real estate prices and ease some tenants' fears of being forced to move every two years.

She said the government's policies are intended to prevent any child from having to ask their parents, “Are we moving again?”

Kim said that by 2025, roughly 25 percent of the people currently living in rented apartments will be able to live in government-leased apartments, especially low-income households.

“Today some 40 percent of the overall households in the country, or 8.45 million, live on rent contracts,” Kim said. “Of those, 6 million are on private rent contract, whether it is jeonse [long-term housing rental deposit] or monthly rent.”

She stressed that because of sharp hikes in rent in every two years, people are forced to relocate to smaller apartments in areas farther from the capital.

“These tenants have become ‘jeonse refugees,’” she said.

She stressed that it took 31 years to pass laws protecting tenants.

“We have now balanced the property rights of the landlords and the tenant’s right to live [in the same residence],” Kim said.

“While there has been some confusion with the new regulations, the government will prepare stringently so that the legislation’s purpose is realized.”

The government stressed that the latest measures, however, were pre-emptive steps.

“In the market, there is still uncertainty on the real estate measures,” Finance Minister Hong admitted.

However, a few hours after Hong made the announcement, Seoul's city government said approval for 50-story buildings will be limited to buildings that are partly commercial space, which could throw the real estate market into confusion.

Lee Jung-wha, director of the Seoul Metropolitan Government's urban planning bureau, said the final decision on the height of apartments in Seoul must follow the city government's 2030 plan.

The plan restrict all residential apartments to 35 stories.

"Only buildings that have non-residential units will be allowed to be more than 40 stories high," Lee said.

But soon after the contradiction between the central government and the Seoul city government drew public attention, the latter caved in.

In a statement, the Seoul city government apologized for the confusion, adding that it will work on solving the issue in cooperating with the government so that public institutions involved in redevelopment project will work "smoothly."