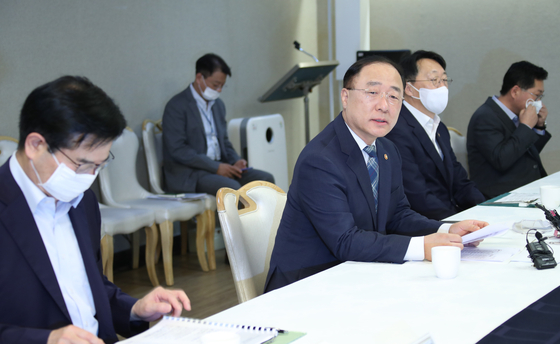 Finance Minister Hong Nam-ki, second from left, presides over a meeting on real estate at the government complex in central Seoul on Wednesday. [YONHAP]


Finance Minister Hong Nam-ki warned of a crackdown on speculative buying of expensive apartments a day after the government said it would try to increase supplies of apartments in greater Seoul, including easing regulations to allow 50-story apartment towers.

The Finance Minister downplayed a disagreement with the Seoul city government on Tuesday over the 50-story tower idea, saying it was a simple misunderstanding.

“We will investigate suspicious trading of high-priced apartments above 900 million won ($755,000),” Hong said on Wednesday at a first real estate market ministers meeting.

“We will constantly monitor major areas that were announced in [Tuesday's] measures and conduct investigations when there are signs of overheating,” Hong added. “We will severely penalize those that conduct abnormal and illegal [apartment] transactions without exception.”

“[Illegal transactions] not only deprive potential homeowners who dream of buying their own apartment but also adds to anxiety in the market by fueling buying sentiment,” Hong said.

On Tuesday, the government announced plans to increase the supply of apartments in the greater Seoul area, including 50,000 units that will be built through redevelopment of existing residential complexes.

The government said it would allow the maximum floor area ratio for redevelopment (also called reconstruction) to be raised to 500 percent of the original area, and redevelopment projects will be able to build 50-floor towers in Seoul.

Currently in Seoul, the maximum floor area ratio for redevelopment is 250 percent and the maximum height for apartment towers is 35 stories.

The government said 50 to 70 percent of the apartments that can be built due to the eased floor area ratio will be "donated" to the government for lease or sale to low-income families, newlyweds and young people,

Hong claimed Tuesday the government will be able to recollect 90 percent of the profits made from redevelopment of apartment complexes through this new system of government participation in their redevelopment.

During the meeting Wednesday, Hong denied any serious conflict with the Seoul city government.

Hours after the finance minister announced the government's 23rd set of real estate measures Tuesday, Seoul's government held its own press briefing where it expressed seeming opposition to the central government’s supply plan.

“There’s question as to whether the private sector will participate in redevelopment projects that involve public institutions,” said Kim Seong-bo, head of the Seoul city’s housing and architecture headquarters. “The Seoul government from the outset disagreed.”

He said the Seoul government believes that redevelopment projects led by the private sector that were “abnormally stopped” should be resumed.

The Seoul city government also said all residential apartments will be limited to 35 stories under the city government’s 2030 housing plan and that 50-floor towers will be only allowed if a building also has non-residential units.

Those were seen as objections to the Moon Jae-in government’s supply plan.

But four hours later, the Seoul government retracted its statement and apologized for the confusion.