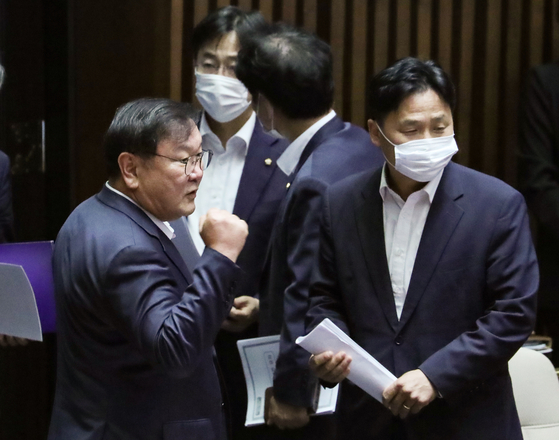 Kim Tae-nyeon, Democratic Party floor leader, clinching a fist after the ruling party pushed through major legislation that the party has been championing including higher taxation on real estates at the National Assembly on Tuesday in Yeouido, western Seoul. [YONHAP]


In less than a week the ruling Democratic Party has rushed through the latest batch of real estate market reform bills, including higher taxation and mandatory reporting of rent by landlords.

On Tuesday, the Democratic Party used its 176-seat majority to push through the bills, including raising the comprehensive real estate tax, increasing taxation on the acquisition of apartments and raising the capital gains tax on profit made from selling apartments.

The comprehensive real estate tax alone received 186 votes in favor among the 188 votes cast. One lawmaker voted against, while another abstained.

The comprehensive real estate tax raises the maximum rate to 6 percent up from the current 3.2 percent. The new tax rate will be applied next year.

In December, the government announced plans to raise the rate to 4 percent. However, with the housing market showing little sign of cooling down, the government in measures announced on July 10 further increased the hike.

The situation was similar with other votes including the capital gains tax, which raised the tax rate on profit made from selling apartments, as 188 out of the 190 lawmakers that voted were in favor with one opposing and another abstaining.

To allow some time for multiple homeowners to sell their current holdings, the capital gains tax hike will be applied starting June next year.

The acquisition tax on buying apartments was raised to a maximum 12 percent from the current 3.5 percent. 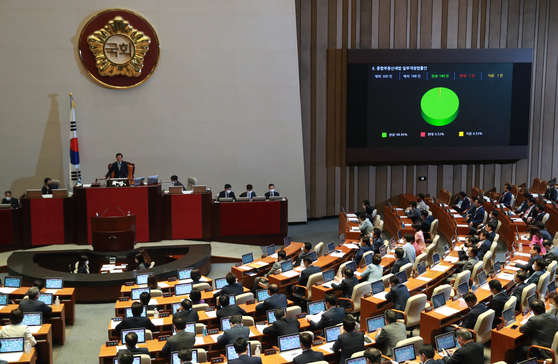 The reform bill that raises the comprehensive real estate tax passing the National Assembly with a landslide vote especially pushed by the ruling Democratic Party on Tuesday in Yeouido. [YONHAP]


When announcing the government's 22nd set of real estate measures, Finance Minister Hong Nam-ki said the purpose was to increase tax pressure from all fronts — when buying, owning and selling apartments.

“We will prevent those who own apartments for short periods [of time] or multiple housing units from making profits through real estate speculation,” Hong said.

On the same day, the ruling party finalized its tenant protection legislation.

The legislation stipulates that all landlords signing a rent contract have to report the details including the rent amount to the local government within 90 days.

This mandatory reporting system will be implemented starting in June next year.

She said better information will help tenants make a better judgement with more options and this will contribute to lowering rent prices, contributing to the stabilization of the housing market.

Kim said the government will operate a system to mediate tensions between landlords and tenants across the country.

The legislation was the last among the three reform bills aimed at protecting tenants.

The other two — the automatic extension of jeonse contracts for two years when the first two-year contract expires, unless the landlord decides to move in, and the 5-percent cap on jeonse price contract renewals — passed the National Assembly Thursday.

The swift execution of the bills has raised concerns and strong protests from the opposition United Future Party on possible side effects.

The bills passed from the committee review stage to law in just three days.


Rep. Yun Hee-suk of the United Future Party on Thursday argued that passing the tenant protection bill without a proper review is dangerous and could have unexpected side effects.

Noting that she is a tenant herself, Yun stressed that the bills and the government real estate policies will only hurt tenants as they will speed up the end of jeonse, the Korean lump-sum deposit rental system.

Jeonse prices have risen sharply recently and many experts are worried that burdened by higher taxation, landlords will ditch their jeonse contracts for monthly rent, reducing the number of jeonse properties.

“In looking at the bills being passed […] the thought that came to me is that after four years I have no choice but to live on monthly rent,” Yun said. “While jeonse has been on the path of extinction, still many people prefer it.”

Some Democratic Party lawmakers faced a public backlash after seeming to question why monthly rent is such a bad thing.