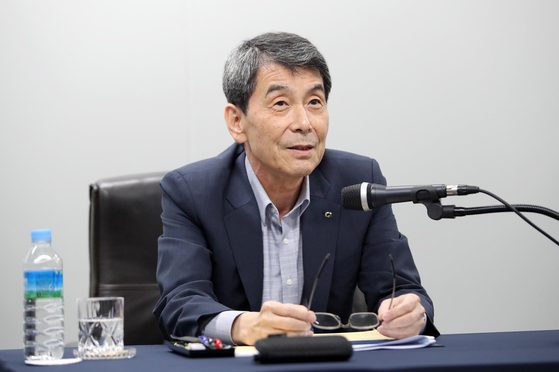 Korea Development Bank Chairman Lee Dong-gull at an online press event held on Monday, where he said that if the Asiana Airlines deal collapses, it would be HDC’s fault. [YONHAP]


On Monday, Korea Development Bank (KDB) accused Hyundai Development Company (HDC) of being uncooperative and unwilling to communicate. The next day, HDC did little but support those claims.


“We are currently confirming what was said at KDB’s press event,” is all Kang Dong-seok, a spokesperson for HDC, had to say on Tuesday.

KDB is a creditor of Asiana Airlines, which HDC agreed to acquire with Mirae Asset Daewoo in December for 2.5 trillion won ($2.09 billion). The deadline for the deal is Aug. 11.

On July 26, HDC requested a renegotiation of the purchase. The request was sent to Asiana and Kumho Industrial, a major shareholder of the airline. KDB responded on Monday, saying that it has no interest in going back to the table.

KDB has rejected the request, claiming that HDC has only made demands in writing and that it has refused requests to engage in in-person discussions on the matter.

“Asking for re-evaluation is excessive and therefore can’t be accepted,” KDB Vice President Choi Dae-hyun said, adding that it has no intention of delaying the closing of the transaction.

The executive also questioned the method of communication, saying that a written request suggested a lack of sincerity.

KDB Chairman Lee Dong-gull said it would be HDC’s fault if the contract is miscarried.

“If HDC truly had the sincerity to acquire, it should have proposed a method that could be trusted by the market,” said Lee, suggesting an additional deposit payment. He added that Asiana Airlines could be reborn as an excellent company once the airline industry recovers after the pandemic ends.

KDB said Kumho Industrial will have the right to end the contract if HDC continues not to respond to requests to engage in face-to-face negotiations.

Kumho Industrial, which owns 30.77 percent of Asiana Airlines, has the right to scrap the deal starting Aug. 12.

“HDC has dragged the deal on long enough,” said Prof. Choi Jeong-chul, who teaches at the Graduate School of Manufacturing Innovation at Inha University. “It now has to make a decision so the next step can be taken by Asiana Airlines.”

“If the deal is scrapped, the first step would be to find another acquirer of Asiana Airlines, which seems unlikely at this point,” said Prof. Hur Hee-young, who teaches business at Korea Aerospace University. “If there isn’t an acquirer, it could go into court receivership or get managed by creditors, which could result in lax management and creation of a zombie company like Daewoo Shipbuilding & Marine Engineering that just sucks in people’s taxes.”

Shares of Asiana Airlines and HDC both closed up on Tuesday. Asiana Airlines closed at 4,090 won, up 3.02 percent compared to the previous day. HDC shares jumped 9.62 percent to close at 10,600 won.