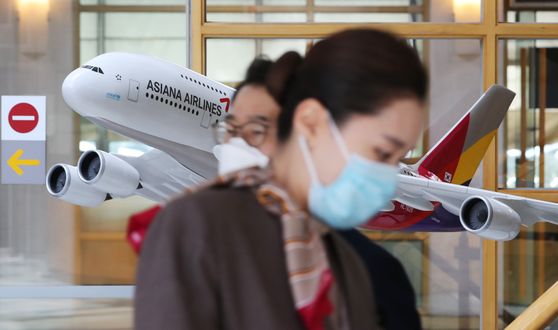 The Asiana Airlines lobby at the company's headquarters in Gangseo District in western Seoul on June 15. The HDC-Mirae Asset Daewoo consortium’s deal to acquire Asiana Airlines is up in the air as HDC demands changes to the terms of the contract. [NEWS1]


The takeover of Asiana Airlines remained deadlocked one day before the closing deadline, with the buyer saying it wants to renegotiate and the airline's main bank saying that the acquirer is ghosting it.

A deal to acquire a controlling interest in Asiana Airlines by a consortium led by Hyundai Development Company (HDC) was expected to be completed by June 27, but for weeks, the buyer has been saying that the terms of the transaction need to be adjusted to take into account material changes in the asset.

“As HDC said earlier this month, situation has changed significantly since the Covid-19 outbreak,” said Han Jae-gwan, a spokesperson for HDC. Despite efforts to acquire the airline, HDC "discovered unexpected negative factors, like additional debt found in Asiana Airlines.”

On June 9, HDC released a public statement that said the debt of Asiana Airlines rose by 4.5 trillion won ($3.76 billion) in the five months following the signing of the agreement. It added that the airline’s “capital impairment is in a very serious state” and questioned the credibility of the airline’s financial statements.

The airline's debt ratio as of the first quarter was 6,280 percent. The ratio has continued to rise since 2017 due to external factors, including the U.S.-China trade dispute in 2018, the diplomatic and trade dispute with Japan in 2019 and Covid-19 this year.

Asiana Airlines rejected HDC’s claims that it did not disclose sufficient information.

HDC adds that certain prerequisites to acquire the airline still need to be met, like gaining an approval from Russia for business combination. Six countries need to approve the acquisition.

It appears that the deal does not automatically expire and that the offer was not an exploding one, with the Korea Development Bank (KDB) noting that while June 27 was the agreed closing date, the two parties can continue their discussions after the date unless one of the two pulls out.

“The period to close the deal can be negotiated between the parties,” said Baek Jun-young, a spokesperson for KDB, a main bank of the airline.

KDB is questioning the sincerity of HDC and whether it is really determined to acquire the airline. The bank claims that efforts to contact HDC to discuss the matter have been unsuccessful.

KDB “requested HDC to meet in person to discuss the acquiring of Asiana Airlines, but we never got a response,” said Baek. “There needs to be a discussion on how HDC wants the conditions of the deal changed, but we’re hearing nothing. KDB is currently just waiting.”

HDC claims that the parties in the deal are communicating.

“Unfavorable conditions of the business environment in and outside the country have increased the debt ratio,” of Asiana Airlines, wrote analyst Ahn Jin-ah from eBest Investment & Securities in a report on Monday. “The measure the airline can take is to cut cost.”

Fixed costs, including fuel and airport fees have fallen significantly. On year, the price of fuel in the first quarter was down 15 percent, while airport fees declined 18 percent during the same period.

Asiana Airlines is projected to report a 35 percent drop in sales to 1.13 trillion won in the second quarter, while a 238.5 billion won operating loss is expected, according to Ahn.