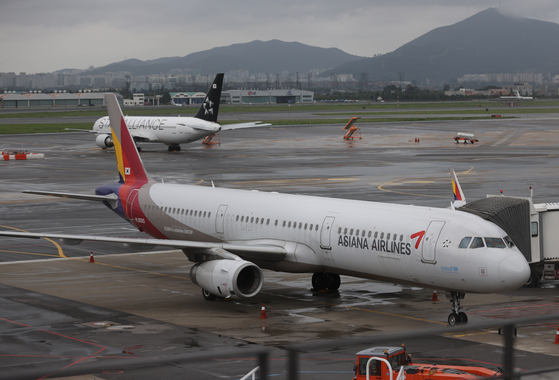 An Asiana Airlines plane is parked at Gimpo International Airport on Aug. 27. [YONHAP]


Hyundai Development Company (HDC) is sticking firm to its position on the acquisition of Asiana Airlines, possibly dooming the deal and the airline itself.

In an email Wednesday, HDC told Korea Development Bank (KDB) that it still wants to conduct additional due diligence on Asiana before it goes ahead with the transaction, according to local reports.

Lee Dong-gull, Chairman of KDB, and HDC Holdings CEO Chung Mong-gyu met to discuss the acquisition on Aug. 26. KDB, which is the main creditor to the troubled airline, said nothing specific about the deal was discussed during their meeting.

HDC couldn’t be reached on Thursday to confirm the email, while KDB and the Export-Import Bank of Korea, another creditor, both said they couldn’t confirm whether they had received the email.

Market watchers say HDC’s request for reevaluation suggests that it wants to scrap the deal, as KDB previously said it can’t accept HDC’s request to further evaluate the airline.

The deadline for the deal was Aug. 12.

In December, HDC and Mirae Asset Daewoo signed the deal to acquire 31 percent of Asiana Airlines from Kumho Industrial, as well as new shares to be issued and stakes in six related companies for 2.5 trillion won ($2.1 billion).

HDC has said that because the airline has taken on so much debt since the deal was first signed, it wants to conduct additional due diligence.

HDC put down a 250-billion-won deposit in the transaction.