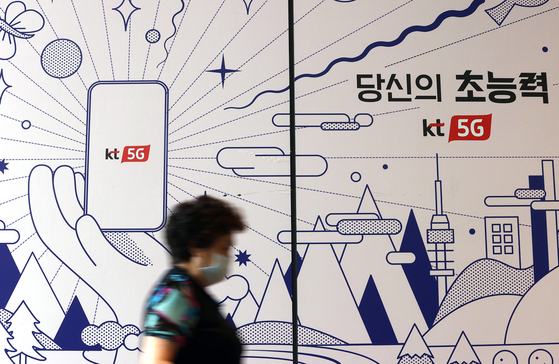 A citizen walks past a phone shop in central Seoul on Wednesday. [YONAHP]

A year after the service’s launch, 5G networks currently offer connection speeds four times faster than the previous 4G LTE, according to the Ministry of Science and ICT.

On Wednesday, the government announced the results of the first quality assessment for the 5G networks provided by Korea’s three mobile carriers — SK Telecom, KT and LG U+. All three started offering 5G services in April 2019.

The average download speed on 5G was measured at 656.56 megabits per second (mbps), while upload speeds averaged 64.16 mbps.

Compared to 4G LTE connection speeds measured last year, the 5G download speed is 4.1 times faster, while the upload speed is 1.5 times faster. The figure was not even close to what mobile carriers boast in their advertisements: Speeds 20 times faster.

“4G LTE speeds weren’t fast either in the early days, but the connection quality got better and faster after the bandwidth widened and networks stabilized. Likewise, 5G is bound to get faster as technology develops,” said Hong Jin-bae, Ministry of Science and ICT director for telecommunications, in a Wednesday briefing.

Despite the carriers’ opposition, the Science Ministry decided to disclose the individual performance of each 5G network in order to motivate facility development, Hong said. SK Telecom outperformed the other two in terms of overall download speeds, with 788.97 Mbps to KT’s 652.1 Mbps and LG U+’s 528.6 Mbps.

One complaint frequently raised by 5G users is that 5G devices often automatically switch to 4G LTE. The government’s investigation found that 6.19 percent of download and upload attempts made on 5G networks automatically shifted to 4G LTE. The transition rate to 4G LTE was highest in crowded indoor spaces, as well as on public transportation, where the figure exceeded 7 percent.

KT’s 5G network proved the most stable from this perspective: Its transition rate to 4G LTE was 4.55 percent. SK Telecom scored 4.87 percent while LG U+ was much higher, at 9.14 percent.

The government also checked the mobile carriers’ 5G coverage maps publicly disclosed on their websites. Within Seoul, the companies were offering 5G coverage over an average 425.53 square kilometers (164 square miles), equivalent to roughly 70 percent of the city. As for Korea’s six largest cities aside from the capital, 5G coverage averaged 931.67 square kilometers, which the ministry explained were mostly in city centers and heavily populated areas.

While all three provided similar 5G coverage in Seoul, LG + offered the widest connections for the six cities outside the capital city.

The study also included field investigations of indoor locations like supermarkets, department stores, bus terminals, hospitals and convention centers. The three companies had installed equipment in an average of 1,275 places, among which 67.93 percent had a stable 5G connection.

The science ministry will conduct another investigation on 5G quality in the latter half of the year, with results due to be announced in November. While this year’s study will be confined to Seoul and the six largest cities, the plan is to gradually expand the scope of the study to include rural areas by 2023.