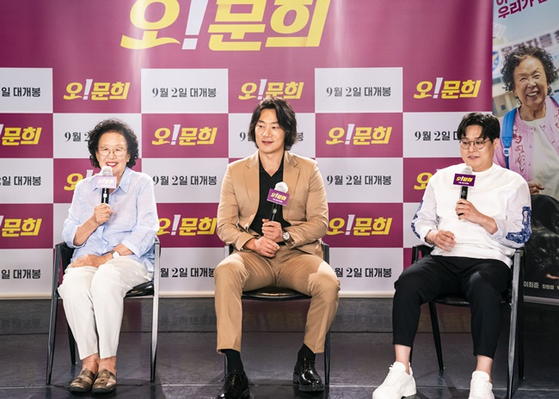 From left, actors Na Moon-hee, Lee Hee-joon and director Jung Se-kyo participate in an online press event to promote their film "Oh! My Gran" which is slated to hit theaters next month. [CGV ARTHOUSE]


One of the greatest privileges of being an actor is there’s no retirement age for the work you love to do — actor Na Moon-hee is living proof.

The 78-year-old is known to be one of the most diligent actors in the film industry — Na already met the audience earlier this year on the big screen through comedy film “Honest Candidate,” and this time she's back with “Oh! My Gran.”

“The script just hooked me to the story,” Na said in an online press event on Wednesday. “The scriptwriter, Kim Soo-jin, tells the story in a way that can delight the audience regardless of their age.”

Na features as Moon-hee, a grandmother with Alzheimer’s who is the sole witness of a hit-and-run incident involving her granddaughter Bomi.

While Bomi lies in a coma and the police investigation stalls due to a lack of evidence, her son, Do-won (played by Lee Hee-joon), decides to take matters into his own hands and sets off with his mother on a mission to find the perpetrator.

“Although her memory fails from time to time, she is very perceptive,” Na said.

“What I sympathized the most with Do-won was as a single father, he had to be the breadwinner and take care of his mother and his daughter by himself,” Lee said. “I never realized how difficult that could be.”

According to director Jung Se-kyo, he was both touched and surprised by the level of enthusiasm the duo showed for their roles.

“Na learned to drive the tractor for the first time, and Lee personally traveled to Nonsan, South Chungcheong, to learn the regional dialect,” Jung revealed.

“I like to research and prepare for the role before we go into shooting,” Lee explained. “I went there and also spent the night in an ajeosi's [middle-aged man] home whom I met while traveling.”

Na isn’t the kind of actor to shy away from new challenges. Aside from driving the tractor, she also has her share of action and works with wires for the first time in her decades-long career.

After making the audiences laugh and cry through countless television series and films, what draws the actor to the screen now are the stories.

“It must be absolutely fun,” she said.

“I could see why she has been so beloved by the masses for decades [after working with her],” Lee added. “When we were filming, she was ever so polite not only to the actors, but also to the rest of our crew as well. Her kindness and courtesy are the reasons behind why she is so loved.”