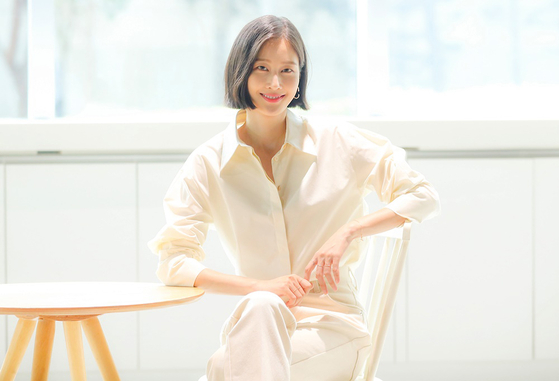 Korea’s top model Lee Hyun-yi says age 37 is not too late to start a new career. Lee, whom we have been more used to seeing on a runway over the past 16 years, has taken her first step as an actor.

Lee will take on the role of a mother raising two children in JTBC’s new family sitcom "Hanging On!" which is based on authors Shin Tae-hun and Na Seung-hoon’s popular Naver webtoon of the same name that ran for more than 10 years from 2009 to last year and has accumulated 2.8 billion views. 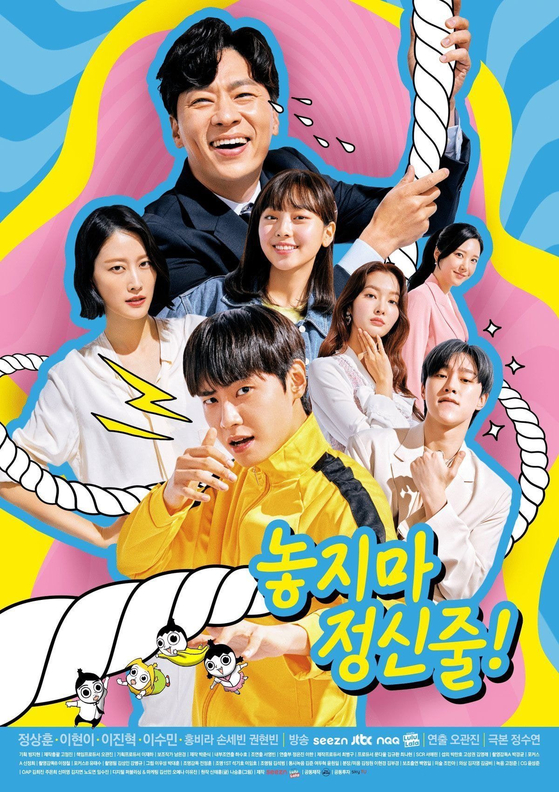 A poster of "Hanging On!" that will be broadcast on JTBC every Thursday starting Aug. 6. [SEEZN]

Lee appeared as if she was a rookie when she sat down with Ilgan Sports for an interview, worlds away from the reputation of catwalk pro that she's earned for herself.

Acting was never on Lee's to-do list as she always felt it was off-limits for her. But she changed her mind completely when she happened to read the script of “Hanging On!” in her office. As a type of person who enjoys challenges in life, she decided to make auditioning for a role in “Hanging On!” her next challenge.

“At first, I was reading the script just for fun. But I liked it so much that I was starting to think, 'I really want to take part in this sitcom.'

"Like any other audition, I was given some lines to act out. By the last round of the audition, I was so determined to win this role. I think I became attached to my character ever since I started preparing for the first audition. The director continued to say, 'Try to be more natural.' I was unsure of the result until the very last day because the director never gave me a hint. I feel like I barely made the cut (laughs)."

When Lee decided to audition, she received lessons from an actor who works in the theatrical field. But when she acted based on the conventional acting techniques that she learned, the director asked her to show a more natural side.

“It was easier to express my emotions by putting aside the technical aspects. It used to be quite unnatural, but now I think I've gotten better.”

Lee described the filming environment as very supportive, thanks to actor Jung Sung-hoon who plays her husband in the show.

“Although I was a bit lost in the beginning, I soon got the hang of it scene after scene. Jung taught me how I should act from A to Z. Even in the scenes in which he doesn’t appear, Jung helped me without leaving the filming set."

Lee described using her body while delivering the lines as the most difficult part.

“Since it was my first time acting, I was already caught up in memorizing lines, but it was extra hard to use my body simultaneously. Jung and I rehearsed the scenes over and over."

As a mother raising two sons, Lee could easily relate to her role in the show.

“My character shows a mother's efforts to keep harmony within the family, and I feel I wouldn’t have been able to relate with this character if I never had kids.

“I haven't seen the finalized version after shooting, so I don't know how it has turned out, but I'm ready to appreciate any kind of criticism. I think every comment will be helpful for me to take the next step as an actor. Fortunately, I have an easygoing personality. I will take note of constructive criticism but I won’t get hurt by hate comments."

"Sitcoms are a much lower barrier to entry because you don’t really need to watch the previous episode to understand. You can still enjoy the show even if you watch from the middle of the episode. I hope people watch it at least once because I think it's a unique sitcom, like an entertainment show."

She doesn’t have another project planned yet, but she hopes to continue to pursue acting work in the second half of the year.

“I’m just grateful that I can have an opportunity to try something new at this age. I feel like the more I try acting, the greedier I get, feeling that I can try better next time.”

"Hanging On!” will be broadcast on JTBC every Thursday starting Aug. 6 at 12:10 a.m. and can also be watched online through Seezn, YouTube and Facebook.

From cars to business, this racer proves they're all connected