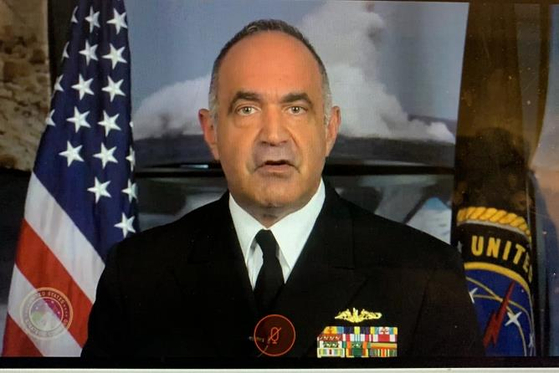 Charles Richard, commander of the U.S. Strategic Command, speaks in a virtual address during a Space and Missile Defense Symposium Tuesday. [YONHAP]


The U.S. Strategic Command (Stratcom) chief warned Tuesday that North Korea continues to develop nuclear weapons and that the country's intercontinental ballistic missile (ICBM) tests could pose a threat to the U.S. mainland.

“North Korea continues its illicit pursuit of nuclear weapons and are advancing their missile systems,” said U.S. Navy Adm. Charles Richard, the Stratcom commander, during a Space and Missile Defense Symposium in Washington.

Richard noted in a virtual keynote address that North Korea’s continued development of its nuclear and missile programs challenges American forces and allies in the region and may endanger the U.S. mainland as well.

“These capabilities threaten our forces and allies in the region,” said Richard. “Beyond that, you are all more aware than most that their ICBM tests in the last few years can even pose a threat to our homeland."

His remarks follow a leaked United Nations report by an independent panel of experts monitoring UN sanctions that indicated that North Korea has miniaturized nuclear weapons and is continuing to develop its nuclear and missile weapons programs.

Richard in his speech went on to stress the importance of nuclear deterrence as he addressed concerns over threats from China, Russia and Iran.

“In order to deter our adversaries in the 21st century, we need to affect and alter their decision calculus,” said Richard. “We need them to know that any attack on the United States, or our allies, will have little margin or probability of success and that our response will result in a very bad day for them.”

He went onto stress, “If deterrence fails we are prepared to deliver a decisive response […] I mean decisive in every possible way.”

Reuters reported Monday that according to the confidential UN report, North Korea is pushing ahead with its nuclear weapons program and several unidentified countries believe it has “probably developed miniaturized nuclear devices to fit into the warheads of its ballistic missiles.”

It added that one country assessed that North Korea may seek to further develop miniaturization abilities in “order to allow incorporation of technological improvements such as penetration aid packages or, potentially, to develop multiple warhead systems.”

The interim report was submitted by a panel of experts to the 15-member UN Security Council’s North Korea sanctions committee on Monday.

Such an assessment was also reached in the 2018 Korean Defense Ministry white paper.

He added that the South Korean military is “closely monitoring North Korea's nuclear and missile activities” and that South Korean and U.S. intelligence authorities “are maintaining a close cooperation system.”

Pyongyang last conducted a nuclear test, its sixth one, in September 2017. North Korea also conducted several ICBM tests in 2017, including two Hwasong-14 missiles on July 4. It launched a Hwasong-15 ICBM on Nov. 29, 2017, considered capable of striking any part of the continental United States.

North Korea has suspended nuclear tests and long-range missile testing since 2018 amid denuclearization negotiations with the United States. Though North Korean leader Kim Jong-un and U.S. President Donald Trump have met three times starting in Singapore in June 2018, the two sides have failed to bridge differences on the scope of denuclearization needed for sanctions relief.

Kim last week said in a speech marking the 67th anniversary of the end of the 1950-53 Korean War that nuclear deterrence will permanently guarantee North Korea’s national security.

He said, according to North Korean state media, "Thanks to our reliable and effective self-defense war deterrence, there will no longer be war on this land and our national security and future will be firmly guaranteed permanently.”