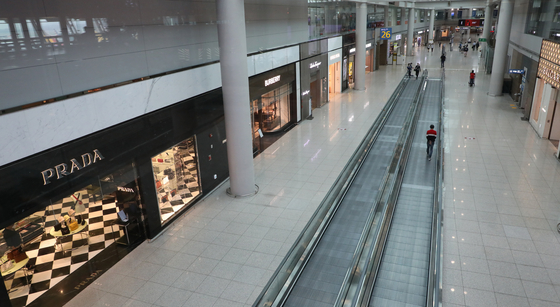 The duty-free section of Incheon International Airport is empty as people avoid international trips. According to the tourism ministry, the cancellation rate for trips abroad was 72 percent as of June, with 3 trillion won ($2.53 billion) of business lost. [YONHAP]


Incheon International Airport is resuming the bidding process for duty-free retail spaces in Terminal 1. Six units — four large and two small — are being made available, with a total of 6,131 square meters (65,993 square feet) of floor area hitting the market.

Duty-free stores obtain business rights at the airport every five years through open bidding. The fourth round started in February for contracts allowing them to operate inside the airport until 2025.

Six sections are vacant, as some cash-strapped duty-free retailers decided to withdraw from the bidding. SM Duty Free closed its operations at the airport in early July.

The airport has come in strong with some unconventional offers in an attempt to keep the airport from becoming a retail ghost town.

“As the pandemic is unlikely to end soon, and with little sign that the economy will bounce back, we decided to offer a much bolder and flexible rent policy to the duty-free retailers,” the airport wrote in a statement.

The airport also said it is discussing with the government the lowering of the fixed rent charged after September, and it has allowed some retailers to stay on for an additional five years without going through the bidding process.

This means a retailer can operate for up to ten years, or until 2030, if it obtains business rights this time.

Shilla, Lotte and Shinsegae took the offer and said they are willing to participate in the bidding.

“We’ve been asking the airport to waive the fixed rent for the time being and charge rent based on sales. They have finally listened to our complaints, and we will positively review participating in the bid,” said a spokesperson from Lotte Duty Free.

“Incheon International Airport is the world’s No.1 airport. It would be embarrassing to have part of its duty-free store space shut down,” said one duty-free source who requested anonymity. “If the world happened to realize it was because the airport squeezed retailers with high rents, it would definitely be a top story. I think the airport was also pressured that its main business was on the brink of being closed.”

The airport gets 60 percent of its revenue from retail operations.