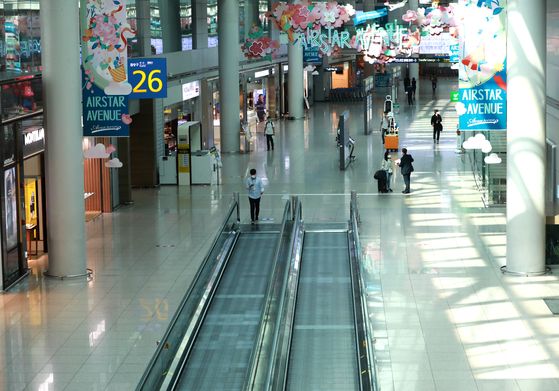 The duty-free store section located in Terminal 1 of Incheon International Airport is empty as the number of customers drops from the coronavirus pandemic. [NEWS1]

While tumbleweeds are not yet rolling through the duty-free shops at Incheon International Airport, they could be soon, as cash-strapped retailers are in no hurry to sign expensive leases at an airport that's all but empty.

Duty-free retailers are in final negotiations with the airport on what to do with their stores in Terminal 1 once leases expire on Aug. 31. Duty-free stores obtain business rights at the airport every five years through open bidding. The fourth round started in February for contracts allowing them to operate inside the airport until 2025.

Recognizing the challenges faced by the operators, and recognizing its own dependence on the duty-free business, the airport is bending the rules to keep the spaces filled. It is allowing, for the first time ever, the current tenants the right to continue on without going through a bruising round of bidding.

Getting 60 percent of its operating profits from the duty-free business, the airport can't afford to lose tenants.

As it stands now, about 28 percent of its duty-free space up for bidding this year has attracted no bidders at all, while much of the rest is facing a change in pricing that could be detrimental to airport cash flows.

Of the eight leases up for bid — a total of 10,392 square meters (111,859 square feet) of space — two locations with a total of 2,958 square meters of space — DF2 and DF6 — have generated no interest whatsoever. And SM Duty Free, which occupies 918-square-meter DF9, said Monday that it has no interest in continuing on at Terminal 1.

“While we are doing our best to survive amid a longer-than-expected coronavirus pandemic, its hard to resolve the rent problem with Incheon International Airport,” SM Duty Free said in a statement. “Considering the government’s policies, the drop in visitors to the airport and accumulating financial difficulties, we decided to close operations as of Aug. 31.”

Large retailers accepting the airport's offer to stay on without subjecting themselves to the bidding process are squeezing the airport. They are trying to get a break on rent by altering the pricing mix in their favor or asking for the most liberal of lease terms.

Lotte, Shilla and Shinsegae pay on average 80 billion won ($66.9 million) in monthly rent to the airport. Even though they received 50 percent discounts, the top three retailers may still suffer 50 to 60 billion won in deficits, according to industry officials.

Lotte Duty Free is negotiating to go month to month on their rent to minimize uncertainties and give it an out in case the pandemic continues longer than expected. Lotte may be better off than others, as it only operates one section in Terminal 1.

Shilla Duty Free, which operates three sections in Terminal 1 and faced its first quarterly loss this year, requested the airport waive the fixed portion of its rent and allow it just to pay a portion of sales. It is asking the airport to accept what amounts to a commission in lieu of cash.

“Even if the airport accepts our offer and changes the rent policy, the three duty-free retailers will have to withstand around 10 billion won of losses every month. Unless a vaccine suddenly falls from the sky, we don’t know what’s going to happen. We are doing our best to hold up,” said an industry source.