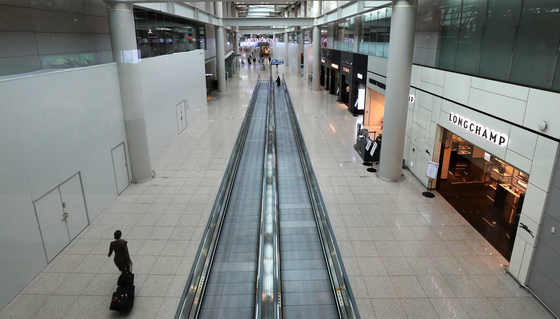 
Incheon International Airport's Terminal 1 duty free could soon be more than half empty as bidding for six spaces fell through with cash-strapped duty-free retailers dropping out.

This is the first time bidding for all duty-free sections available failed.

Duty-free stores obtain business rights at the airport every five years through open bidding. The recent round was the second in a process that started in February for contracts allowing them to operate inside the airport until 2025.

Hyundai and Shilla Duty Free issued statements Tuesday that they dropped out due to coronavirus uncertainties.

According to the law, a bid only goes through if two or more operators compete for the same area. Bids were all canceled since all spaces had either a single bidder or no bidders, according to an announcement made by the airport Tuesday.

Despite the airport making unprecedented rental offers — promising 30 percent discounts, a flexible rent plan and lowering of the minimum bidding price — it was not enough to convince the retailers, as the once lucrative business struggles as a result of worldwide travel bans.

"At a time like this, we have to take a conservative approach. The Chinese merchants have helped bring back sales up to 70 percent of that before the coronavirus, but our operating profits are still in the red after deducting commissions," said Park Seok-in of Lotte Duty Free.

"In the case of the two operators that did not participate this time, I am not sure if there’s any incentive for them to participate again."

The airport said it will not make additional changes to the discount offers. It resumed the bidding Wednesday and said it will take applications until Oct. 12.

“In the big picture, I think the airport is not as desperate as us. They've solved the pressing problem as some retailers agreed to continue operations temporarily. The ones losing sleep over this issue are the duty-free operators,” said an anonymous source from one of the four major duty-free retail companies.

Currently, the six marketed spaces are occupied by Shilla and Lotte and City Duty Free, which accepted the airport's offer in July to temporarily extend their business rights until next March.

“If the third round fails, the airport hinted at the possibility of making private deals, without any competition, with retailers that participated in the bid," said another industry source.