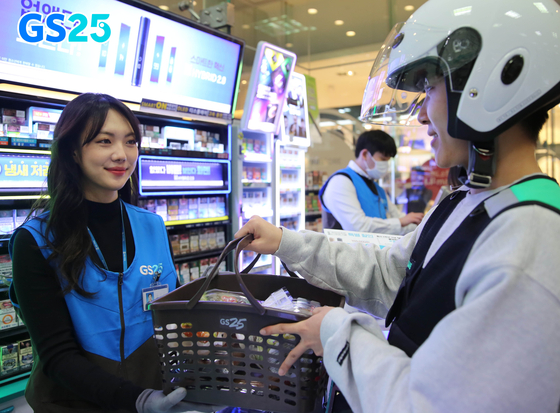 GS Retail, the operator of GS25 convenience stores, reported 2.21 trillion won ($1.87 billion) in sales in the second quarter in a preliminary report on Thursday, down 4.2 percent on year. Its net profit fell 38.6 percent on year to 33.63 billion won.

Sales for the GS25 franchise division inched up 0.3 percent on year, but operating profit was down 19 percent on year to 70.2 billion won. Fewer customers near schools and academies because of the coronavirus crisis and increased marketing costs dragged down the convenience stores' performance.

The Parnas Hotel, which is operated by GS Retail, suffered from the collapse of the tourist trade because of the pandemic. In the second quarter, the occupancy rate at the hotel in Coex in Gangnam District, southern Seoul, was only 23 percent.

GS Retail “plans to provide differentiated services through various platforms from convenience stores, including delivery service,” said a spokesperson for the retailer. The hotel will try to attract more locals, the spokesperson added.

GS25 recently launched an on-foot delivery service for people who order products from its stores. Users of an upcoming platform, regardless of whether they drive or not, can sign up to deliver products in their local area for a little less than $3 per delivery.

Anyone can earn money handling local deliveries for GS25