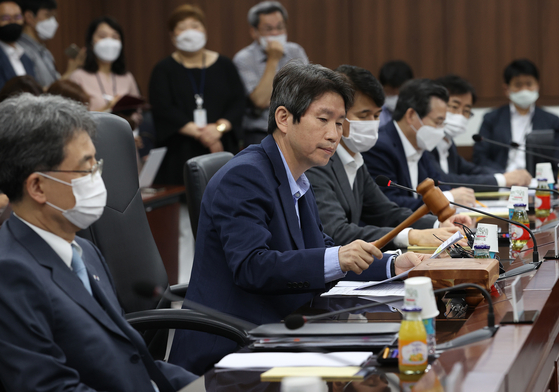 Unification Minister Lee In-young, center, bangs a gavel to approve a $10 million donation to North Korea via the World Food Programme at an inter-ministerial council meeting at the Central Government Complex in central Seoul on Thursday.


South Korea on Thursday approved a plan to provide $10 million in humanitarian aid to North Korea through a UN-affiliated international organization.

The Inter-Korean Exchange and Cooperation Promotion Council, an inter-ministerial body under the South’s Unification Ministry, ratified the donation to the World Food Programme (WFP) next week to support the organization’s nutritional program for newborns and women in North Korea.

The aid will support the WFP’s monthly program to supply specialized nutritious foods like blended cereals or fortified biscuits to a million pregnant women, nursing mothers and children facing chronic malnutrition in the country.

According to the WFP’s website, the assistance will go to supported institutions like nurseries, hospitals, psychiatric wards and some boarding schools across the North.

While this particular aid package from Seoul was conceived earlier this year, official ratification was delayed as a result of Pyongyang’s decision to unilaterally demolish the inter-Korean liaison office in Kaesong in June.

Though the two Koreas have not repaired their relations since the incident — with nothing in the way of an apology from the North — Seoul’s Ministry of Unification explained it was moving forward with the aid in response to recurrent requests from the WFP as well as based on the need to “improve the humanitarian situation for groups most in need of help in North Korea.”

Last year the Unification Ministry gave the WFP and Unicef $8 million for their nutritional and medical assistance programs. This was followed by an attempt to dispatch around 50,000 tons of rice as direct aid to Pyongyang, but the North refused to take the aid amid the collapse of its nuclear negotiations with the United States.

The fact that the aid plan has gone through amid continuing tensions on the peninsula testifies to the influence commanded by newly appointed Unification Minister Lee In-young, who is also a four-term lawmaker in the ruling Democratic Party.

“We can always express our sincerity and desire for cooperation to the other side through words, but such feelings are better conveyed through action,” Lee said at the council’s meeting on Thursday.

“There is a need to begin inter-Korean cooperation and exchange programs on the humanitarian front and through small trades, and gradually expand this by implementing joint promises and agreements,” he said.

Lee also used the occasion to express regret at Pyongyang's opening of floodgates on the Hwanggang Dam on the Imjin River without notifying South Korea, discharging immense amounts of water downstream south of the border.

The act constituted a violation of a joint agreement between the two Koreas in 2009 after six South Koreans were killed by flash floods caused by an unexpected release of water by the North.

“The North may have had many difficulties of its own as a result of the heavy rains [this week], but the measure to discharge waters [from the dam] should have been alerted to us beforehand,” Lee said.

The minister called for liaison between the two countries to be “immediately” restored.

“Any type of communication channel is fine, even if it is through [unilateral] broadcasts,” he said. “The smallest of cooperation in terms of disaster response in the border region will become the priming water for greater collaboration.”