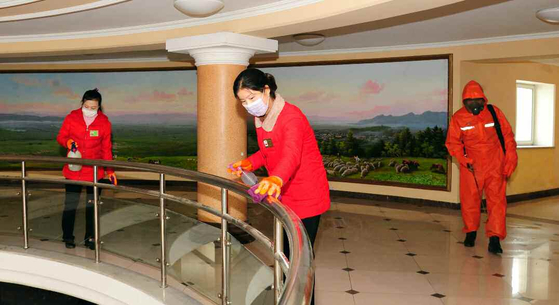 North Korean workers disinfect a government building in Kangwon Province, in a state media photograph. The regime on Wednesday said it elevated its social distancing scheme to the highest level. [NEWS1]

Welcoming the UN Security Council’s adoption of fast-track procedures for aid groups to receive exemptions from UN sanctions, a Ministry of Unification official told reporters that South Korea will work toward facilitating sanctions exemption procedures for private organizations seeking to send relief to the North.

Until now, private groups seeking to send aid to North Korea had to obtain sanctions exemptions for each item they planned to send, leaving many unable to set long-term agendas for their efforts.

Seoul is seeking to implement a quota-based exemptions system where organizations can donate approved items so long as they are within a predetermined amount, the official said.

South Korea will actively promote this proposal to the United Nations and its member states, the official added.

The Covid-19 pandemic has aggravated the challenges faced by relief groups in providing humanitarian assistance to the North, prompting a UN Security Council sanctions committee Monday to revise exemption guidelines to address urgent issues in the country.

The sanctions exemption period for relief projects was also extended from the current six months to nine months.

The Unification Ministry official credited the adoption of the new guidelines by the United Nations to suggestions made by the South Korean government and private organizations.

“[The decision] reflected much of the proposals made during various [South Korea-U.S.] working level discussions, like minister-level or high-level talks, as well as the working group,” the official said.

The measures also came at a time when North Korea is doubling down on antiepidemic measures within the country aimed at curbing the spread of the coronavirus.

Though it officially insists it has no Covid-19 cases, the regime’s state media on Wednesday announced the country elevated its government quarantine scheme to the highest level, the equivalent of a national lockdown.

This entails shutting down all travel within and outside of the country by land, sea and air, as well as the closure of all schools and public places, including shops and restaurants, according to the Korean Central Broadcasting Station, the state radio service.

The country is believed to have implemented a three-tiered social distancing system, similar to South Korea’s five-tiered scheme, sometime in the last few months.

The “super special” level imposed this week, was used to describe the antiviral measures put in place in February when the virus began its global spread. In July, after a former defector from South Korea infiltrated back into the North, the regime instituted a “maximum emergency” alert for the virus across the country.

But in both cases the regime had yet to create an organized system, meaning these most recent measures may be the toughest antiepidemic rules North Korea has enacted so far.