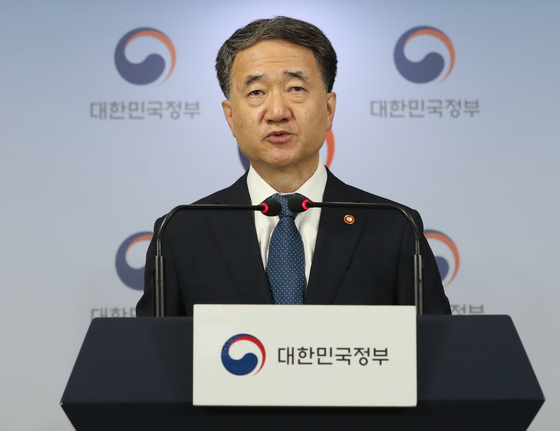 Health and Welfare Minister Park Neung-hoo urges doctors not to go on strike this month in a statement Thursday at the Central Government Complex in Gwanghwamun, central Seoul. [NEWS1]

Minister of Health and Welfare Park Neung-hoo Thursday urged doctors across the country not to go on strike while the coronavirus rages, stressing the government would pay closer attention to their complaints about the proposed medical reforms.

The plea came as the largest union of doctors, the Korean Medical Association (KMA), and the Korean Intern Resident Association (KIRA) have threatened to go on strike this month to protest the Moon Jae-in administration’s proposed reforms, which will increase the number of doctors.

Precisely how many doctors in the associations plan to walk out is unknown, but the KMA has some 26,000 members, and the KIRA about 16,000. KIRA said its doctors would go on strike for 24 hours starting from Friday at 7 a.m., unless the government retracts its reforms. The KMA has threatened to go on strike on Aug. 14, Sept. 3, Oct. 7 and in November.

The confrontation began on July 23 when Park, Education Minister Yoo Eun-hye and the ruling Democratic Party (DP) agreed in a policy meeting at the National Assembly to increase admissions to medical schools by 4,000 students over the next decade from 2022 to 2031, in increments of 400 students annually.

According to a rough draft, some 3,000 of these new doctors will be required to practice outside the Seoul metropolitan area, or 300 out of the 400 yearly. The other 1,000 doctors will be required to specialize in fields such as epidemiology, trauma and biomedical research, which are unpopular fields among doctors in Korea, due mainly to their heavy workload and comparatively low paychecks.

Admissions to medical schools have been frozen at 3,058 students per year since 2006. In 2032, the admissions will revert to 3,058 medical students annually, according to the plan.

The government and the DP also agreed to establish a public medical school in North Jeolla by March 2024 and review building medical schools in regions that do not have them already. As of 2019, there were a total of 105,628 doctors practicing in hospitals and clinics, of which nearly 54 percent, or 56,640, were concentrated in the Seoul metropolitan area.

The decision immediately drew a backlash from the KMA, which castigated government authorities for failing to discuss the issue with them beforehand, and insisted that a lack of patient care in rural areas had nothing to do with a lack of doctors, but was more about a lack of medical infrastructure and support in those regions.

Park said Thursday in a statement that the decision to allow more medical students was “an inevitable decision” to benefit the general public and the nation, and asked doctors to “understand” this.

“We have a lot of important details to talk about in regards to the issue of increasing medical school admissions,” Park said, such as how to educate and train them, which medical fields to place them in and where to send them after they receive their licenses. Park said the government would discuss those matters with medical associations, plus ways to improve medical services outside the Seoul area.

“At a critical time of the coronavirus pandemic, public safety may be harmed if medical groups stage a walkout,” the health minister said. “The government will prepare for all possible scenarios, but if the public’s health and safety ever come under threat, we will severely react,” he continued, alluding to legal charges.

In response to KIRA’s planned strike, Seoul’s five largest university hospitals said they were contacting their professors and lecturers to fill the possible void Friday.