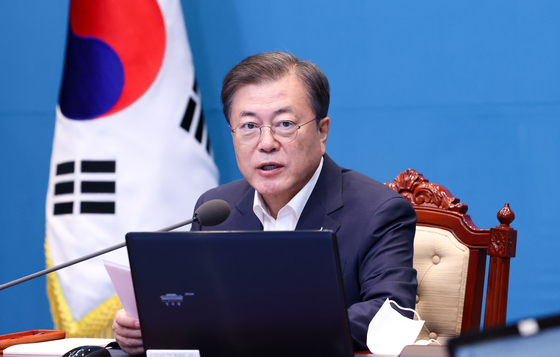 
President Moon Jae-in said Monday that he plans to launch a new government agency to regulate the real estate market and support a series of measures to curb home prices.

Moon unveiled the plan to establish a new regulatory agency to oversee the real estate market, as his administration struggles to rein in skyrocketing property values and a plummeting approval rating.

In his opening remarks for the senior secretariat meeting at the Blue House, Moon said housing policy has become his administration's top priority.

The government and the ruling party have presented what he called unprecedented measures, which have been approved by a National Assembly dominated by members of his Democratic Party (DP).

“For effectiveness of the measures, I will consider establishing a watchdog for the real estate market if necessary,” Moon said.

He added that he will protect the end users while stopping speculation. The series of policy packages was designed to levy higher punitive taxes on those who own multiple homes, regulate loans to prevent speculative purchases, build more housing and protect tenants’ rights.

Moon insisted that his administration's active intervention in the housing market, rather than leaving prices to the market economy, is part of a global trend.

“Although we have increased tax burdens to own properties, it is still far lower than those in other advanced countries,” Moon said.

“In major advanced countries such as Germany, France, England, Japan and the United States, tenants are guaranteed the right to extend their contracts for unlimited terms, unless there is some exception,” he said. “In major cities, rent control systems are being operated.”

Moon said the government will do its best to help people understand the policy and to prevent any chaos in the market, admitting that many feel uneasy about the sudden, sweeping changes.

“The measures cannot be perfect, so we will also continue modifying them,” he said.

Possibly as a response to mounting public anger, Moon added that the government will consider tax reductions for people who own single, moderately-priced homes. He also promised to offer more public housing projects.

Moon said the government measures are slowly showing some effects, expressing hope for more stable home prices. He also urged politicians and the media to support the government’s policy.