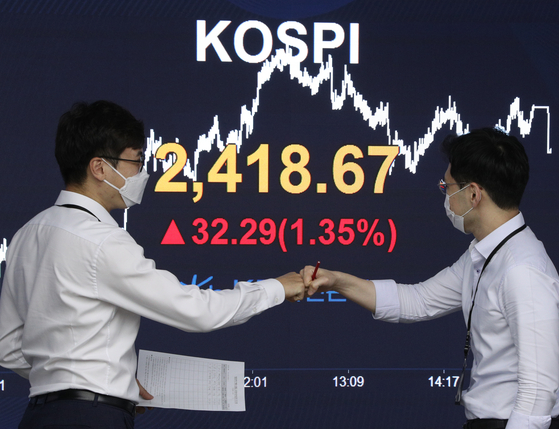 Two employees fist-bump in front of the screen with the Kospi close at a dealing room at KB Kookmin Bank in the financial district of Yeouido, western Seoul, Tuesday. [NEWS1]


Stocks hit their 2020 highs Tuesday on abundant liquidity and hopes for an economic recovery.

Indications that governments globally will take measures to boost their economies and better-than-expected second quarter earnings from domestic companies were also factors in the market's rally.

The benchmark Kospi closed at 2,418.67 on Tuesday, up 1.35 percent. It was the seventh consecutive daily gain.

Not only did the Kospi hit its high of the year, but it closed above 2,400 for the first time since June 2018.

Korea stocks are now up 63 percent from the year's low, which was hit in March when the index touched 1457.64.

A quick V-shape recovery of Korea’s main index is raising some concern that a bubble is forming, but local analysts say there is still more room for it to go up.

“We can’t say the index has reached its peak considering better-than-expected earnings from Korean companies in the second quarter and also expectations of full recovery in the second half,” said Huh Jae-hwan, a researcher at Eugene Investment & Securities.

“It is true that some items are priced higher than they should be, but up through the 2,400 and 2,450 level, it would be hard to say there is a discrepancy between the index and company fundamentals.”

Brokerage houses in Korea have upped their Kospi forecasts for the year.

More-than-enough liquidity in the market from retail investors is one of the main forces boosting the bourse. It also suggests that the trend will continue for a while longer.

According to the Korea Financial Investment Association (Kofia), investor deposits surpassed 50 trillion won this month, which is nearly a twofold increase from 28 trillion won in January. Credit loans made for stock investments reached an all-time high of 15.5 trillion won early this month.

“Considering the abundant liquidity for the stock market derived from a low base rate and regulations on real estate investment, it is likely that retail investors will take the main role in the market from now on,” said Lee Jae-sun, an analyst from Hana Financial Investment. "It could be momentum for the restructuring of Korea's stock market."

Untact-themed stocks, such as Naver and Kakao, are losing steam. Naver lost 0.64 percent, while Kakao dropped by 0.98 percent.