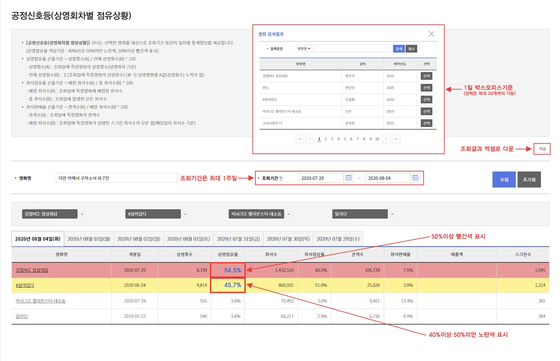 An example of the newly implemented service on the Korean Film Council website where users can monitor screen monopolization. [KOREAN FILM COUNCIL]


The Korean Film Council is to implement a new monitoring system of the daily box office charts to try and raise awareness about the monopolization of commercial films by major distribution companies.

After selecting a film and the date period, the chart will either turn yellow if the screen share surpasses 40 percent, or red if it goes over 50 percent.

The new system also shows the proportion of ticket sales and the seats the film takes up out of the total number of films in the box office.

The council hopes the information can be utilized as a warning for film distributors and insiders within the industry, although no official restrictions or measures will be taken if screen monopolization does occur.

“By sharing such information with the public, we hope that an ideal environment can be created where various kinds of films can co-exist harmoniously,” the organization said in the statement.