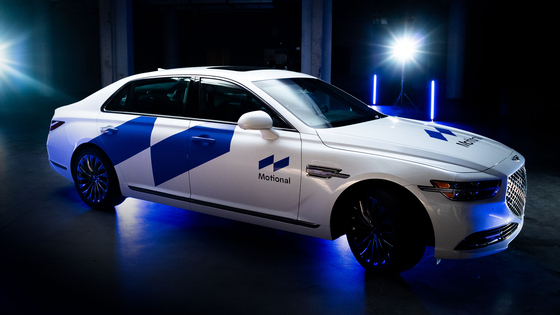 Motional unveiled a Genesis G90 with a Motional logo on Wednesday to celebrate the company's new name. [HYUNDAI MOTOR]


A joint venture between the Hyundai Motor Group and Dublin's Aptiv has been named. It will be known as Motional.

The 50:50 joint venture, which was formed last year and is specializing in self-driving vehicles, was valued initially at $4 billion, with Hyundai Motor, Kia Motors and Hyundai Mobis investing a total of $1.6 billion in cash and $400 million in technology.

As a portmanteau of “motion” and “emotional,” the new name suggests the company’s objective to offer self-driving mobility in a people-first approach.

"Motional, in all of its previous forms, has been leading driverless technology for decades," said Karl Iagnemma, President and CEO of Motional. "Our DNA — a combination of Aptiv's expertise in advanced technology and Hyundai's leadership in both vehicle manufacturing and R&D [research and development] — is uniquely powerful, and positions us to fundamentally change how people move through their lives."

Iagnemma is from Aptiv and was formerly president of the company's autonomous mobility department. Motional was staffed with the Irish company's entire self-driving technology team.

The joint venture is pursuing the development of Level 4 self-driving technology, which means the car can do almost all the driving.

It plans to conduct tests on a fully-autonomous system in the latter half of the year and offer the autonomous mobility system to "robo-taxis" and ride-hailing operators from 2022.

The team currently working for Motional has scored some notable achievements in the self-driving technology.

In 2016, it began a pilot project involving a self-driving taxi business in Singapore. It also is running the biggest retail robo-taxi mobility service. The service started in 2018 in Las Vegas and is still in operation today.

Motional, which has some 1,000 employees, is headquartered in Boston and has offices in Pittsburgh, Las Vegas and Santa Monica, California. It also has offices in Singapore and recently opened a branch in Seoul as well.

Seoul will act as a technology hub for the company.

“Motional represents the next frontier of innovation as the company pioneers a new era of safe, accessible and green transportation. We have a long history of being on the cutting edge of automotive technology and look forward to continuing that legacy with Motional.”