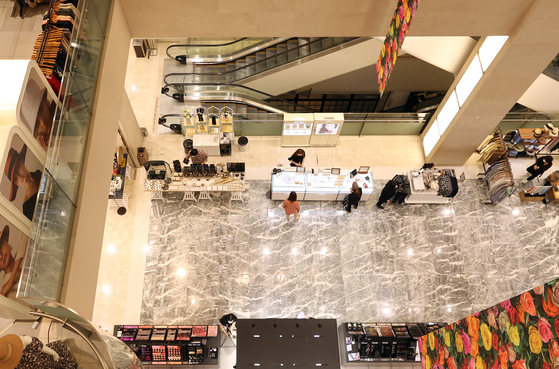 An almost empty Shinsegae Department Store in central Seoul in May. [YONHAP]


Shinsegae went into the red in the second quarter, largely due to the body blow dealt by its duty-free business by the Covid-19 pandemic.

It was the first time Shinsegae reported a quarterly loss since Emart was spun off in 2011.

The company reported a 32.6 percent drop in sales on year to 1.01 trillion won.

Duty Free revenues in the second quarter were 380.3 billion won, down 57.9 percent on year, while the operating loss was 37 billion won compared to a 17.2 billion won operating profit a year ago.

The department stores division reported 10.9 billion won in operating profit, down 68.1 percent on year, on sales that were down 2.9 percent on year to 1.04 trillion won. Shinsegae said sales in this division started to recover in June after bottoming out in March.

Shinsegae “expects an improved performance in the third quarter on the gradual recovery of duty-free sales from reduced airport rental fees, increased profitability of Shinsegae International from the reorganization of the domestic fashion business, increased online channels in China and the continuous sales growth of [furniture brand] Casamia,” said Shinsegae in a statement.

Rival Lotte Shopping also swung into the red in the second quarter. It reported a net loss of 198.98 billion won compared to a 76.89 billion won net profit a year earlier. Sales fell 9.2 percent to 4.05 trillion won.