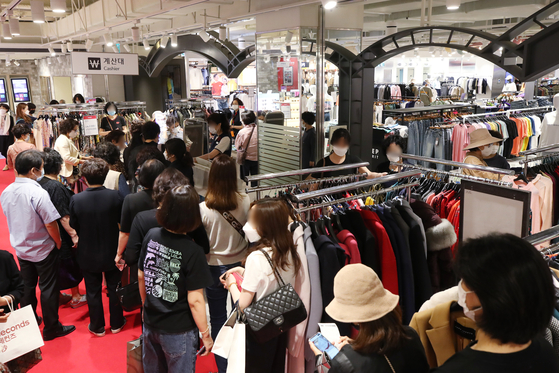 A crowd forms at Lotte Department Store in Jamsil, southern Seoul, in July to purchase luxury items during a promotional period. [YONHAP]


Despite a range of promotions to try and drum up business, Lotte Shopping reported a significant net loss in the second quarter with sales decreasing as consumer sentiment took a hit due to the coronavirus pandemic.

In a preliminary report on Thursday, Lotte Shopping reported 4.05 trillion won ($3.42 billion) in sales in the second quarter, down 9.2 percent on year. It swung to a 199-billion-won net loss in the April-June period from a 76.9-billion-won net profit in the same quarter last year. Its operating profit was down 98.5 percent to 1.39 billion won.

Sales at Lotte Mart and Lotte Cultureworks, the operator of Lotte Cinema and Lotte Entertainment, fell sharply as people tried to avoid crowded locations for fear of contracting the coronavirus, according to Lotte Shopping.

Lotte Shopping didn’t reveal the performance of Lotte On, its online platform released in April, but the "etcetera" section it is included in saw operating loss expand 965 percent to 82 billion won.

The net profit and loss for each individual business was not disclosed.

Department store sales stood at 667 billion won in the second quarter, down 12.3 percent on year, but operating profit rose 54 percent compared to the previous quarter to 43.9 billion won due to the popularity of luxury items. Rent discount in Indonesia and reduced administrative expenses in Vietnam helped. Compared to last year, operating profit was down 40.6 percent.

Lotte Mart’s sales were down 8.5 percent to 1.47 trillion won, while its operating loss expanded 70.5 percent to 57.8 billion won. Temporarily shutting down stores and reducing hours due to the virus affected the discount mart sales.

Lotte Cultureworks was hit hard with its sales nosediving 82.2 percent on year to 31.7 billion won. It swung to 50.6 billion won in operating loss, as the number of moviegoers shrunk and movie releases were delayed.

“In the second quarter, domestic retailers went through a lot of struggles due to withered consumer sentiment caused by avoidance of crowded locations due to the spread of Covid-19,” said a spokesperson from Lotte Shopping. “Regardless, sales at department stores are recovering while performance of Lotte Hi-Mart and home shopping are expected to continue to do well from offering premium electronics devices.”

Rival Shinsegae is yet to report its second-quarter earnings.