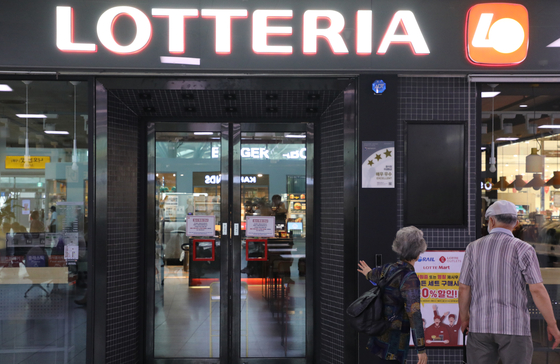 
Korea saw the highest number of Covid-19 cases this month with 54 patients Wednesday, amid mounting alarm over a group of Lotteria fast-food workers who got infected after eating together at another franchise restaurant in Seoul.

As of Wednesday afternoon, 10 employees of the Lotteria chain tested positive for Covid-19, according to the Seoul Metropolitan Government.

A group of 19 managers and employees of different Lotteria branches had a dinner gathering on Aug. 6 at a Chicken Baengi restaurant in Gwangjin District, eastern Seoul. Some of these individuals also took part in a meeting at Lotteria’s Gunja Station location in Gwangjin District that afternoon and had an early dinner at another restaurant nearby.

The first of the Lotteria employees, a resident of Goyang, Gyeonggi, tested positive on Tuesday. Infected employees include those working at branches at Hyehwa and Jonggak Station in Jongno District, central Seoul. Seven of the infected employees are residents of Seoul. Health authorities say that the employees were not wearing masks during their meeting and dinner.

However, there is concern over greater spread, especially since the employees continued working in their restaurants before they tested positive. Health authorities are determining how many customers visited the related restaurants. 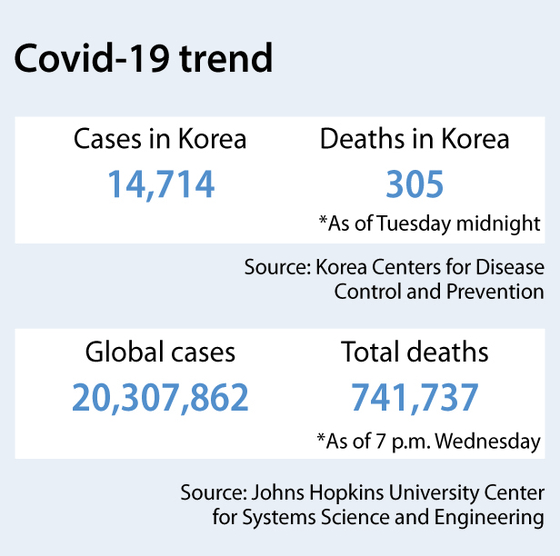 The Seoul city government sent out a text message asking anybody who visited the Chicken Baengi restaurant in Neung-dong, Gwangjin District, from between 5 p.m. on Aug. 6 and 2 a.m. on Aug. 7 to get tested.

Of the 54 new cases, 35 were local infections, bringing the total number of Covid-19 patients in the country to 14,714 as of Tuesday midnight, according to the Korea Centers for Disease Control and Prevention (KCDC) Wednesday.

This marks the highest number of new cases in 17 days, and the first time that the patient number passed 50 this month. There were 58 new cases recorded on July 26, and the number had generally averaged between 20 and 40 in August.

There were 19 new imported cases and no additional deaths reported, with total Covid-19 fatalities remaining at 305.

Of domestic cases, there were 19 new cases in Gyeonggi, 13 in Seoul and three in Busan, with continued attention on church-related clusters and cases related to the Namdaemun Market.

A total of 10 patients are related to the Namdemun Market cluster as of Wednesday, according to the Seoul city government.

A family member of the ninth merchant was confirmed to have Covid-19 Tuesday, which is presumed to be a quaternary infection.

Seoul health authorities are tracing contacts of the Jungang center merchant. All 566 merchants working in the C complex of the Namdaemun Jungang Shopping Center will be tested. So far, a total of 515 merchants and visitors to the Namdaemun Market have been tested, of which 215 have come out negative. The others are awaiting results.

The Seoul city government plans to strengthen quarantine measures on the 351 traditional markets in the capital area.

Health authorities also said that starting from Aug. 19, wedding reception buffets will be designated as a high risk and quarantine measures will be bolstered.

Wedding reception buffets will require QR code scanning as is required for other high risk venues such as noraebang (singing rooms) and clubs. While weddings and buffets are allowed under the lowest Level 1 of the government’s social distancing measures, health authorities are taking the move ahead of the Chuseok harvest holidays and wedding season in the second half of the year.