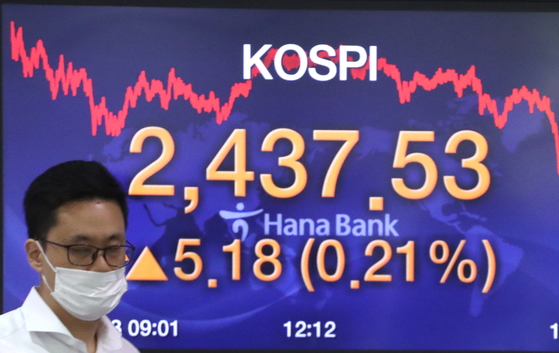 A screen shows the closing stats for the Kospi in a trading room at Hana Bank in Jung District, central Seoul, Thursday. [YONHAP]


Stocks closed a tad higher Thursday, extending gains to a ninth session on institutional and individual buying. The won rose against the dollar.

Trading volume was high at about 892 million shares worth some 18 trillion won ($15.2 billion), with gainers outnumbering losers 481 to 359.

The index came to a strong start but erased most of the gains on strong foreign sell-off. Foreigners dumped a net 352 billion won on profit-taking, the largest amount since July 7.

Among gainers, drugmaker Celltrion spiked 2.15 percent to 308,500 won, as the company began selling Covid-19 diagnostic kits in the United States.

The local currency closed at 1,183.30 won against the U.S. dollar, down 2.0 won from the previous session's close.