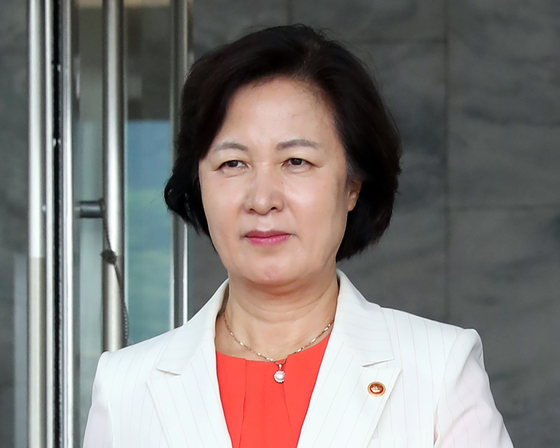 Justice Minister Choo Mi-ae leaves the Ministry of Justice building in the Government Complex in Gwacheon, Gyeonggi, on Aug. 7 after the ministry announces the reshuffle of senior prosecutors. [YONHAP]


Elite prosecutors are accusing the administration of retaliation for their investigations targeting politicians and officials close to President Moon Jae-in, with some stepping down in protest in the past week.

The Ministry of Justice said Friday that Kim Nam-woo, deputy head of the Seoul Eastern District Prosecutors’ Office, recently submitted his resignation. Kim was in the midst of investigating allegations that Justice Minister Choo Mi-ae’s son was given preferential treatment, and ultimately let off the hook, after he went AWOL from the military in 2017.

After Choo took office in January, Kim was named the deputy head of the Seoul Eastern District Prosecutors’ Office. In his new post, he led the investigation into Choo’s son.

Since January, Choo carried out three major reshuffles of the prosecution's ranks. The latest, concerning senior prosecutors, took place on Aug. 7. Kim was left out, while three of his classmates from the Judicial Research and Training Institute who entered the program in 1997 were promoted in the latest reshuffle.

“I won’t beg for a promotion,” Kim was quoted as telling other prosecutors, according to the officials within the prosecution.

“Many of the prosecutors who faced political revenge for going after the powers-that-be say they carry resignation letters in their pockets to submit anytime,” one prosecutor said.

Han, the lead prosecutor of an investigation into former Justice Minister Cho Kuk and his family for alleged academic fraud and financial corruptions, was demoted as the deputy head of the Busan High Prosecutors’ Office in January. He was further demoted in June to work as a researcher at the Institute of Justice.

Yang Seok-jo, a deputy head of the Supreme Public Prosecutors' Office's anticorruption and organized crimes department, was demoted to serve as a prosecutor within the Daejeon High Prosecutors’ Office.

Song Gyeong-ho, third deputy head of the Seoul central office who investigated the Cho family, was ordered to serve as head of the Yeoju Branch Office of Suwon District Prosecutors’ Office in Gyeonggi.

Shin Bong-su, second deputy head of the Seoul central office, was ordered to serve as the Pyeongtaek branch head of Suwon District Office. Song was in charge of investigating suspicions that the Blue House had abused its powers to influence the Ulsan mayoral election and help Moon’s friend Song Cheol-ho.

Under their leadership, the Seoul Southern District Office indicted Sohn in June 2019 on charges of using confidential information obtained as a National Assembly member to speculate on real estates in Mokpo, South Jeolla. Earlier this week, Sohn was convicted of the charges and sentenced to 18 months in prison.

Choo is expected to carry out further reassignments, targeting mid-level prosecutors, in the coming weeks. Prosecutors said they worry that political retaliation against those associated with investigations against Moon's allies will continue.

Meanwhile, the public is increasingly demanding that Choo be removed from the office. Petitions were filed on the Blue House’s public petition board last month to demand her removal, and they have gathered enough support to warrant a response from the presidential office.

The Blue House has promised to respond to petitions that collect more than 200,000 signatures in one month.

One petition demanding Choo’s removal was filed on July 14 and received more than 210,000 signatures within a month. The petitioner called Choo a disgrace to the president and the people and accused her of acting like a king.

A separate petition demanding Choo’s removal was filed July 23 and had obtained more than 200,000 signatures by Friday morning.

The opposition lawmakers recently made a failed attempt to impeach the controversial justice minister. Last month, a motion to impeach Choo was voted by 292 lawmakers, and 109 supported it, while 179 voted against it.